Deer are without a doubt one of the most popular prey out there. While there is a fair number killed every hunting season, they certainly aren’t the easiest animal to track and kill. This is especially true if you are new to the hunting game. Deer are incredibly smart with sense like you wouldn’t believe. They can literally smell you from a mile away and hear you coming for even further out. This is why many skilled hunters prefer blinds or other stationary hunting grounds.

Fewer movements mean chances to make fewer noises. Add to this that deer are extremely resilient, and you might be wondering just how one would even back one of these creatures. Well, it not only takes a skilled hunter, but it takes a knowledgeable hunter. Sure, you can get lucky, but can you guarantee that you’ll get lucky when it’s really going to matter.

Are deer herbivores? Yes, deer eat many different types of grasses and nuts such as acorns and hickory’s along with many others. They also will eat your flower garden and fruits and vegetables such as corn and apples among many others. Toward winter they prefer the nut mast as its high in protein and other nutrients that will fatten them up for winter when food is scarce.

What Does Being A Herbivore Mean 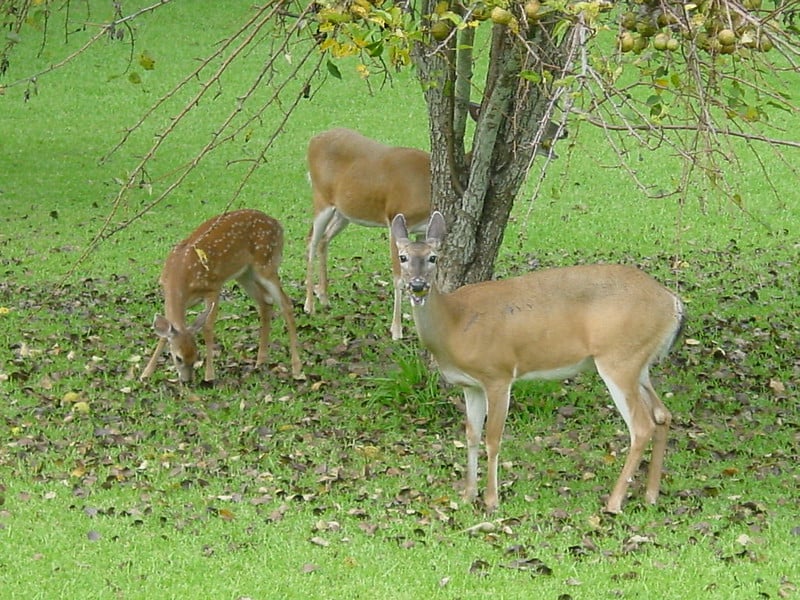 With just a little bit of time and research, you’ll find that there is a wide range of deer species out there. You’ll find everything from the white-tailed deer to the mule deer. Even a moose or elk could be classified under the deer species.

There are a lot of people that aren’t aware of this, but despite the abundance of the species and the wide variety, they are all herbivores. What exactly does this mean? It means that they don’t eat meat and specifically feed on plants, shrubs, and tree body parts.

It is also not uncommon for them to snack on nuts, grass, fruits, vegetables, corn, and apples. If you have a garden or an apple tree in your backyard and live in a rural setting it wouldn’t be a big shocker to spot a deer or two in your yard from time to time.

Towards the winter months, the deer will prefer nuts. This is because they are trying to prepare themselves for the winter. Nuts are usually high in protein and consuming enough of them will cause the deer to put on weight, which is something that’ll help sustain him through the oncoming winter months when their out food sources will be scarce to non-existent.

On another side note, it is not uncommon for the deer to snack on pine boroughs, branches, or pretty much anything they can find.

It wouldn’t be quite the right assessment to say that deer are completely vegetarians because it is not rare for them to scoop up the occasional worm or insect when feeding in the wild. They just don’t eat meat intentionally.

That being said, there are several individuals that have claimed to come across deer eating birds and other small mammals.

It was not 100 percent certain if they carried out the kill or just came across the corpse and was extremely hungry. The only thing that is known for sure is that deer weren’t really designed for eating meat.

Their mouth, teeth, and jaws just do not afford them the ability to meat off other animals, they are designed to chew plants.

As you’ve probably already guessed, this means that they are mostly active during the night in their search for nutrition.

Since they are a prey animal to many other creatures out there, they do not stay in one spot for any longer than necessary. This means that they quickly feed on the food available in the area and move on to another spot as soon as they possibly can.

All that being said, this does not mean that deer are opposed to eating during the day. You’ll actually find them feeding any time of the day or night. However, since they are considered nocturnal herbivores, it is during the night hours that they will do most of their feeding.

Deer like to eat more in the late fall to help pack on the pounds for the upcoming winter, as was discussed earlier.

Deer are usually the most active during the dusk and dawn hours according to the latest studies and research. And, there is quite a bit of data out there regarding deer feeding habits.

Deer like to be most active under the cover of darkness because they are considered prey to larger and meaner animals, but like most animals, they’ll take what they can get when they can get it.

As was mentioned earlier, it is during feeding times that most hunters get their kills. This is because a lot of hunters have resulted to luring deer in with food. Deer are more common than ever in suburban areas.

And, people will actually leave food out for them now. If you plan on feeding a deer or want to lure one in, you’ll want to make sure that you are offering something that they like.

While you can use traditional corn, apples, or other fruits and vegetables, there are special supplements available on the market. These products will usually contain a combination of oats, soybeans, alfalfa, molasses, along with enriched vitamins and minerals.

All the components are easy to digest, which makes them the perfect option for the deer, given their unique jaws and mouth.

It would not be a stretch to say that deer are one of the most elusive creatures out there. However, now that you know all about their feeding habits, you have a major advantage. Be sure to get out there and take advantage while you have the opportunity. Maybe you are just considering feeding a wandering deer in the backyard.

Whatever the situation is, you now know exactly what deer eat, when they eat, and how they eat.