Birch trees belong to the deciduous family that grows abundantly in regions with temperate and arboreal climate. They have thin leaves and a shallow root system and generally grow to the medium height of 40 to 70 feet. The most remarkable feature of a birch tree is its unique bark. The bark of birch trees is grayish and separates into papery plates. It also has dark horizontal lines along its length.

Is birch good firewood? Yes. Birch is a hardwood, and, thus, performs well as firewood. The performance of birch as firewood varies with its different species.

Let us take a look at these birch firewood species:

Also known as sweet birch and mountain mahogany, black birch is the most desirable firewood species of birch. The black birch owes its popularity to its wood fibers, that are denser than the other birch species. Its denser fibers make it burn for long, and with higher temperature. Black birch also emits a unique sweet smell when it burns.

Yellow Birch is also referred to as swamp Birch. The bark of yellow birch is easily identifiable due to its smooth structure and silvery-yellow color. As the tree grows older, its bark begins to curl back. Though not as dense as the black birch, the wood of the yellow birch is hard and durable. However, because of its sturdiness, yellow birch is harder to split.

Often called paper birch, white birch has a thin and waterproof bark that can be easily peeled off. The bark of white birch is dull white. Its wood fibers lack the strength and density witnessed in the black and yellow variants. This makes the white birch an inferior choice for firewood.

Splitting firewood is necessary to allow sunlight and air to enter the firewood and accelerate the drying. It also helps prevent the firewood from any insect infestation.

Splitting birch firewood is a tricky business. As birch trees grow older, their barks get lankier and thus harder to split.

The process of splitting firewood is most difficult with freshly cut firewood. That’s why it is usually recommended to leave the firewood to dry a little before splitting it. However, birch starts to rot a lot faster than other firewood. Therefore, you cannot leave it alone for long before splitting.

In case you need to store the firewood before splitting it, you should slice or score the bark to avoid decay. The best tool for splitting Birch firewood is a dull ax aka maul. You should remember that the goal behind splitting birch firewood for it to season faster.

[Related Article: How To Split Wood By Hand] 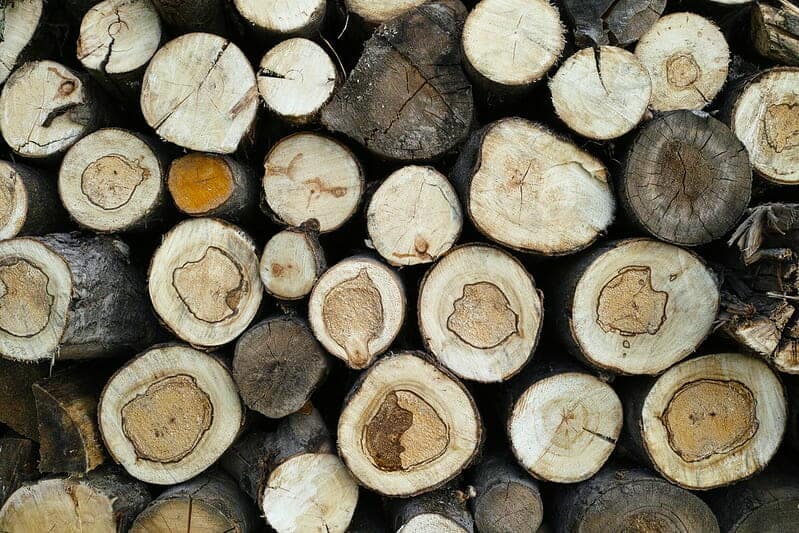 Once the birch firewood is split, you need to leave it to dry. Drying firewood is essential to get the most out of burning it. Greener firewood produces lesser energy and burns out more quickly than dry firewood.

Due to its high sap content and moisture-holding capacity, birch takes longer to dry than any other firewood. On average, birch firewood needs about a year to dry properly. However, many factors can affect the drying time of firewood.

Since the firewood stays in the same place for a long time, you should carefully choose its drying site. Avoid storing it in your house or garage to prevent it from pest infestation. Choose a location with ample sunlight to accelerate the drying process.

While drying birch firewood, you should avoid direct contact of firewood with soil at all costs, to enable a better airflow beneath them. You can also leave a little space between the firewood while stacking them for air circulation.

You might want to look into a moisture meter to test the moisture content before you burn it. You can find them on Amazon for a decent price. Here is a link to the one I have. Moisture Meter (Link To Amazon). Just make sure its 20% or lower and it’s safe to burn.

British Thermal Unit, also called BTU, refers to the amount of energy you need to heat 1 pound of liquid water by 1-degree Fahrenheit.

In simpler words, the BTU of firewood determines the energy it can produce. Most people use firewood to provide heat. Firewood with a higher BTU per cord produces more heat energy and keeps you warm for a longer time.

However, to ensure that the firewood produces its maximum potential BTU, it must be adequately dried.

[Related Article: BTU Of Firewood This article includes a BTU chart of the most popular firewood]

The wood of birch is unique and serves many purposes, the most important among them being firewood. Birch firewood has dense wood fibers, which allows the wood to burn for a more extended period and produce more heat. Such qualities of birch lend a higher position on the list of the best firewood in the world.

However, to use birch firewood to its full capacity, it is essential to be careful about the splitting and drying processes. Well-split and properly dried birch firewood can keep your house warm efficiently during the long winter nights. If you use firewood regularly for fireplace, cooking, or any other purpose, you can buy freshly-cut birch and dry it yourself to extract its full potential.