The eastern wood-pewee produces a distinct whistle call that sounds like a slide whistle. The male birds are the ones that are going to be singing most. They sing during spring migration. If you’re hearing this noise, you can guarantee that this medium-sized flycatcher is out there somewhere.

These birds have short legs and an upright posture. They have a peaked crown which gives their head a triangular shape. They have long wings and that sets them apart from other species.

These birds are slightly larger than the Eastern Bluebird but they’re larger than a chickadee. They measure 5.9 inches and weigh anywhere from 0.3 to 0.7 ounces.

The Eastern Wood-Pewees have a distinct color pattern that sets them apart from the competition. These olive-gray birds are known for having dark wings. Also, they have limited yellow on the underside.

The sides of the breasts are going to be very dark but they might have an off-white belly and throat. When looking at one of these birds, you will see little or no eyering. Adult birds are going to have a white but thin wing bar. The juvenile’s wing bar will be fluffy.

READ  Where Do Birds Go To Die: [Complete Guide]

When you hear this noise, you can likely spot the bird in the distance.

Now that you know what it looks like, you should be able to identify it without any problems whatsoever.

Behavior Of The Eastern Wood-Pewee

Now, you’ll want to learn more about the behavior of the Eastern Wood-Pewee. What does the animal do? Is it a predator? Yes. This is a sit and wait predator that likes sitting on perches. The bird will rush out and eat insects before returning to his or her perch.

They normally perch high in trees in exposed locations. This ensures that they’ll able to maintain a good viewpoint. Watching these birds can be very exciting since they’re fast and nimble.

They’re smaller than many of the alternatives so you might have a hard time spotting them in the distance.

Where The Eastern Wood-Pewee Lives 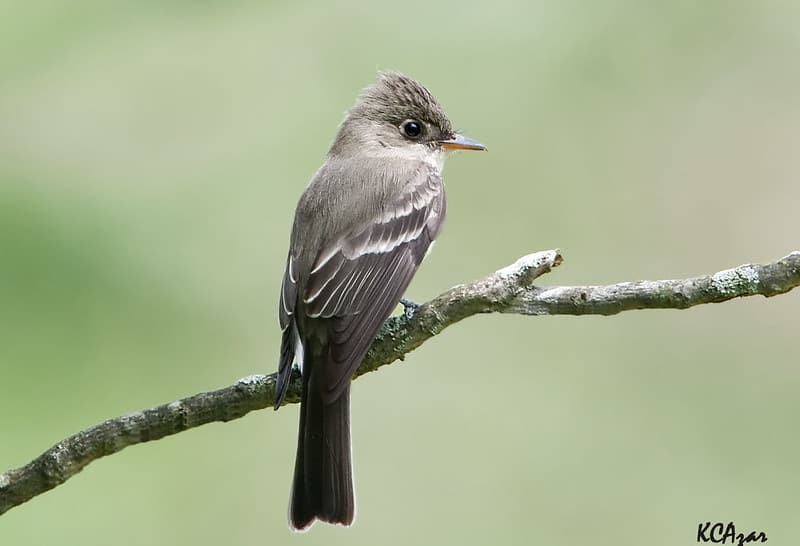 The Eastern Wood-Pewee makes its home in both Canada and the United States. The bird is mostly drawn to public lands but can be found on private lands as well. Little data is available about the bird’s preferred habitat.

But, more are found in the southern and central parts of Ontario compared to Timmins and Lake Nipigon. They can also be found in the United States, mostly in the Great Plains.

Nest sites tend to average around 30 feet so you should be able to see the nest from the ground. These birds will use any tree for nesting but they tend to use birches, maples, oaks, and pines most often.

During the breeding process, the female bird is going to lay three or two eggs which will be translucent-white with some brown flecks. Males will become territorial so they’re going to defend the nesting area aggressively.

They’ll fight other species to keep them away. Simultaneously, it should be noted that males may mate with two females at the same time. The eastern wood pewee eggs will typically hatch in 12 to 14 days with both parents bringing good to the nestlings.

Nestlings will become fledge in 15 to 17 days. Many will end up on the ground during their first flight. The adults will continue providing them with food until they’re able to fly and join them.

Unfortunately, the Eastern Wood-Pewee is not protected under the Species at Risk Act, 2002 or the Endangered Species Act, 2007. So, a decline of more than 70 percent in population was recorded from 1970 to 2011 in Canada.

The decline has been contributed to declining forest habitat and alterations in vegetation. Even with the massive decline in population, the International Union for Conservation of Nature (IUCN) does not believe the species is “globally threatened”.

The current global population of the Eastern Wood-Pewee is estimated at 6,000,000. The IUCN does not see the population decline as a threat. The organization evaluates the species status as “Least Concern”.

There is also a chance that the increase in white-tailed deer has led to the decline.

Either way, the population of eastern wood pewee has decreased in recent years and this is something scientists are worried about.

If you’re lucky, you’ll be able to watch the Eastern Wood-Pewee jot out, snatch an insect, and return to its ledge.

Unfortunately, the population of the eastern wood pewee has dropped in recent years and this is concerning. However, they’re not considered endangered right now so there is nothing to worry about yet.