Are you an adventurous individual who likes experimenting with different meals? Do you enjoy eating food that other people would never touch?

If you get lucky, you may land a bobcat during your next hunting trip. You don’t want to waste the experience so you’re thinking about eating the bobcat’s meat. So, lets get to it, can you eat bobcat meat?

You can eat bobcat meat. As long as you prepare the meat properly, you’ll have a delicious meal that won’t pose any risks. Some hunters refuse to eat big cats because they’re predators and they would prefer to stick with plant-eaters.

While you cannot eat the meat belonging to all predators, you can eat bobcat meat. Since bobcats are part of the cat family, their meat will taste like cat meat.

You should stay away from cheetah, lion, leopard, and tiger meat. However, you can enjoy bobcat meat after a successful hunt. Just remember that you’ll need to pay attention to the laws in your state.

Certain states have made it illegal for hunters to target mountain lions and bobcats.

If you live in an area where it is legal to hunt bobcats, nothing is stopping you from enjoying the meat. Furthermore, you should understand that some Native American tribes hunted bobcats for the purpose of consuming their meat.

There are a few risks associated with bobcat meat but you can avoid potential problems easily. So, you should not hesitate to eat the meat after you’ve bagged a bobcat. 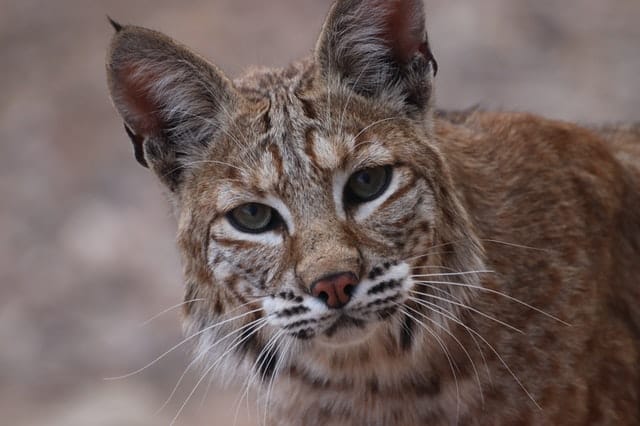 Ultimately, there will always be a risk when eating predator meat. When it comes to big cats, you have to understand that these animals may carry and transmit trichinella spiralis.

This roundworm can cause trichinosis in humans. Thankfully, you can eliminate this risk by properly preparing the meat.

For starters, you should reduce the risk of contamination by cleaning all knives, forks, and cutting surfaces after the meat has been processed and frozen for at least 21 days.

Furthermore, you’ll need to cook the meat thoroughly. To avoid problems, you should cook the bobcat meat to an internal temperature of 165-degree Fahrenheit or higher.

It is pertinent to be vigilant so you can avoid contamination problems.

If you’re an avid hunter it’s likely that you’ve bagged a bobcat or two. Heck, even if you aren’t a hunter, you’ve likely seen one or two of these animals in your neighborhood as of late.

With logging operations and sub-division developments running rampant, more and more of these animals are being pushed out of their homes and into the public eye.

Whether you’ve recently bagged a bobcat or are just thinking about consuming bobcat meat, you are likely wondering what the meat tastes like.

Believe it or not, most people would tell you that bobcat tastes like chicken. Sounds kind of cliché, right? It is, but the meat is surprisingly white and delicious with a pork tenderloin similarity.

When cooked or grilled it maintains a good, crispy texture that makes it perfect for specific recipes and dishes.

Some like to fry it with an egg and some like to let it simmer in a slow cooker. Either way, you won’t be disappointed with the delicious and familiar taste that you’ll experience with this exotic meat.

Bobcat meat consists of protein, fat, iron, riboflavin, and niacin. A small three-ounce serving of bobcat has about three grams of cholesterol and around 134 calories.

Unlike canines, felines have a short gastrointestinal tract (GI) system. This is very beneficial because it minimizes the risk of bacterial infections. Canines, on the other hand, have a slightly longer GI which puts them at a high risk of developing food-borne bacterial infections.

When humans eat canine, in this case, a bobcat, meat, there is minimal risk of developing a foodborne illness. It is also possible to decrease or eliminate these risks altogether by thoroughly cooking the bobcat meat.

You must decide if the food-borne exposure risks are worth it. In some cases, food-borne illnesses have been linked to life-threatening situations and even worse death.

If you decide to go through with it, you need to know the symptoms that point to food-borne illnesses. These include, but are not limited to the following:

If your condition warrants an emergency room visit, you should not delay treatment.

You may be unaware of human diseases that are spread to urban-based bobcats. Evidence reveals that bobcats living in urban areas are at risk of developing parasite-related illnesses, such as Toxoplasma gondii

, all of which originate from human hosts.

While many believe it perfectly okay to eat bobcat meat, some medical experts advise against it. The aforementioned parasitic infestations are spread to bobcats from humans, resulting in minor to severe gastrointestinal symptoms.

Should you hunt bobcats for their meat? While you can do so, you need to make sure it is legal in your area first. Some states have laws against trapping and hunting bobcats.

Furthermore, you may not be able to use dogs or electronic calls. It is pertinent to check the laws in your state before hunting bobcat. If it is okay in your area, you should not hesitate to hunt bobcats and eat bobcat meat. It is delicious and fulfilling.

link to Should You Drop Start A Chainsaw

Before starting any chainsaw, it is important to read the operator’s manual. You should also review basic safety procedures, including how to properly hold and operate the chainsaw. In addition,...

Choosing the right chainsaw for your needs can be a daunting task. With so many different brands and models to choose from, how do you know which one is right for you? In this article, we will...