Most people don’t associate porcupine and cuisine. Why should they? When most people think about porcupine, they think about quills. This is natural because this is one of the defining features of the animal. So, can you eat porcupine?

You can eat porcupine. Quills will certainly remain a formidable deterrent when trying to access the meat of the porcupine even after the animal is dead, but that still doesn’t mean that it can’t be access, cooked, and eaten.

In fact, most people will just burn them off. Just roast the porcupine over an open fire to burn the hair and the quills. This will give you easy access to the carcass so you can proceed with gutting the animal safely. That being said, you might even be surprised to learn that burning off the quills actually gives the meat a different taste. 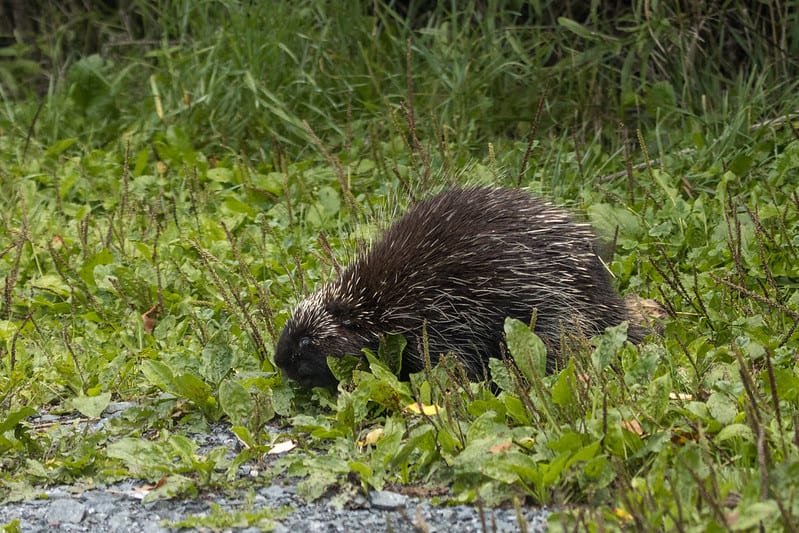 Burning off the quills is actually not the only way to access the meat. Some people like to skin the animal before cooking it. This is usually done with leather gloves, to prevent damage from the quills. Regardless, that still doesn’t explain what the meat tastes like.

When it comes right down to it, most people say that porcupine tastes like it smells, which isn’t too good! For someone that’s never eaten exotic meats, porcupine could best be described with a taste similar to that of pork or chicken. After all, everything tastes like chicken, right?

The meat will likely be some of the darkest meat that you’ve ever seen in your life, but it will be sweet, succulent, rich, and extremely fatty. In fact, the flesh is covered in fat. A 40 lb animal might only end up yielding right around 3 pounds of meat.

That is how much fat there is, but nonetheless, that meat is very good. Of course, there are a variety of ways that you can go about preparing and cooking the meat. Some like to saute it in butter and turn the meat into burgers.

Some like to mix it with hemlock and turn it into a stew. Whatever the situation, you likely won’t be disappointed with the taste, if you can get passed the cooking phase.

Besides being extremely delicious, porcupine meat is one that is actually good for you. The meat contains a lot of properties that can be beneficial in many ways.

To start off, the meat is extremely high in protein. One serving size of porcupine will provide about the same amount of protein that you’d get from lamb or even beef. However, what’s even more impressive is that the met is almost completely cholesterol-free.

Consuming foods that are low in cholesterol can have many benefits like lowering the chances of a heart attack or stroke. In addition to all of this, the meat is filled with omega 3 fatty acids that can regenerate cell growth and help one maintain a healthy heart.

While porcupine meat might be considered exotic by many, it is a meat that provides plenty of potential health benefits. The only problem is accessing the meat.

Getting passed the quills will be quiet the challenge, but once accomplished, you’ll have access to some of the darkest, sweetest, and most succulent meats that you’ll ever get your hands on.

For more information on this subject, check out these sites as well.
https://www.quora.com/What-does-porcupine-meat-taste-like
Porcupine Is Nature’s Best Survival Food and It’s What’s for Dinner

link to 6 Types Of Bears In Alaska

Read This Article
link to 6 Types Of Deer In California