Every Halloween people around here like to decorate the outside of their homes with pumpkins. And a few years back I got to thinking what I could use them for. Because they would throw them out or kids are nice enough to steal them and throw them in peoples driveways. That never made sense to me but, whatever.

Anyway, I asked friends and family if I could have their pumpkins after the holiday and of course they said yes. Being an avid nature lover, I knew some animal or animals would eat them if I set them outside in my little food plot I made for them. And sure enough, deer eat them. More like devoured them! So, with that said, Do deer eat pumpkins?

Deer love eating pumpkins. Deer only seem to eat the insides of a pumpkin though. And not so much the shell. So, carved or jack o’lantern pumpkins won’t work so well cause the insides are taken out.

With that in mind, try and get whole pumpkins and either slice them into halves and set them out or just cut the tops of them off and set them out. Either way will work fine.

Tips On Feeding Pumpkins To Deer 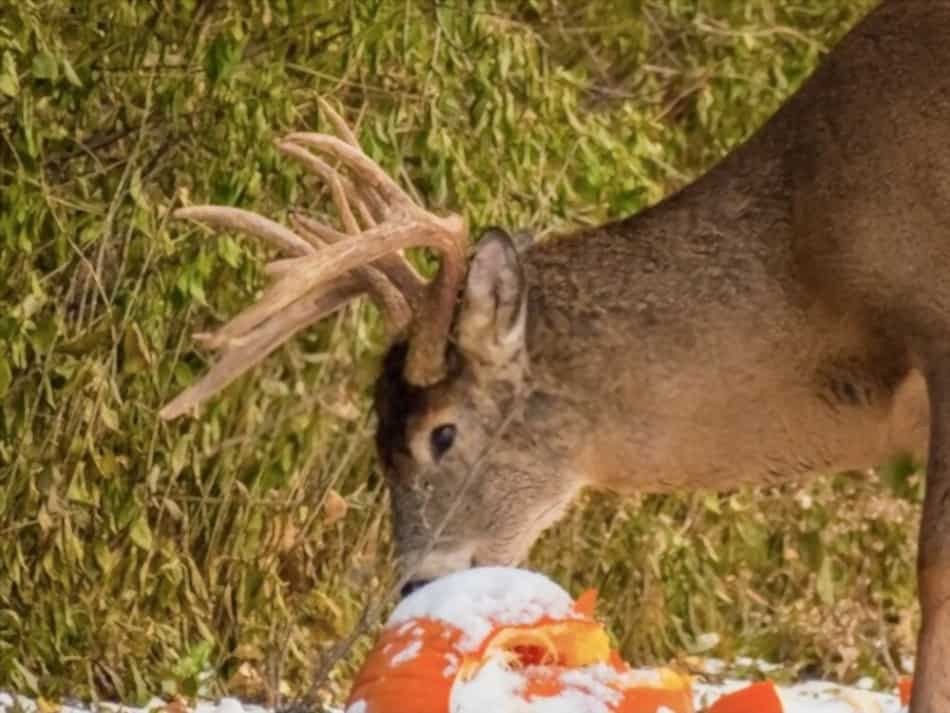 As mentioned above, the deer aren’t big fans of the pumpkin shell. But they do however eat them if food is scarce. So, with that in mind, don’t be worried about putting just the shells out, they will eventually get eaten by deer or something else.

And also as I mentioned above, either slice them in half or cut the tops off before putting a “whole” pumpkin out. (less of a mess if you just cut the tops)

It just makes their life a little bit easier, that is the only reason. Because a deer will stomp it with its hoof to break it open otherwise. Unless you want them to get a work out, then by all means, just throw them out there. And that is pretty much it, the deer will take it from there.

Are Pumpkins Good For Deer

Now on this topic, I had no clue. I had to research what others have said. And what I learned is, Pumpkins are high in fiber content, vitamin C and potassium. So, yeah it’s good for them and really helps them out during late fall/early winter.

The pumpkin seeds are a good source of fat that deer need for the winter months. So, feeding deer pumpkins is a win-win. Your able to do away with your unwanted pumpkins and deer get very good nutritional value from them. Your basically helping each other out.

If you want to learn more about deer and how they prepare for winter, check out my guide, How Do Deer Stay Warm In The Winter

Are Deer Attracted To Pumpkins 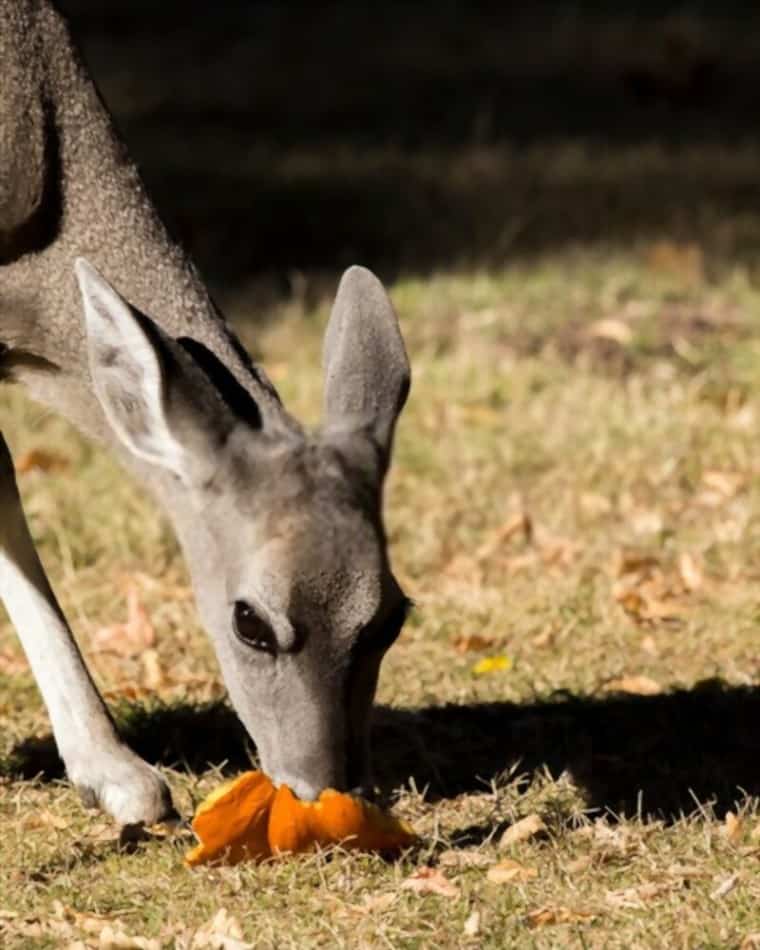 If your worried that if you put pumpkins out for the deer, if they’ll come and eat them, don’t be. They absolutely love pumpkins and yes, without a shadow of doubt, it attracts them. If you plan on growing them, you might want to keep that in mind.

They also love pumpkin plants. Talk to someone who grows pumpkin and I’m sure you’ll hear a complaint or two about deer in their pumpkin patch.

The deer are attracted to the smell of a pumpkin plant and love eating the leaves off it. Which raises the dander of anyone trying to grow pumpkins, like me. But they got to eat to, right?

What Other Animals Eat Pumpkins

Those are just some of the more commonly seen ones. So, you might attract more than just deer. Might want to keep that in mind if that is a problem for you.

In closing, don’t be afraid to feed the deer pumpkins. In reality, your doing them a favor. And your saving on waste. Plus it’ll make you feel good inside knowing that your helping the deer and other animals out by sharing.

Most animals, that don’t hibernate, need sources of fat to help make it through the winter. And pumpkins would be one of those sources. Thumbs up to feeding deer pumpkins. So, no need to think twice about it.

For more info on this, check out these forums.
Does any one have any experience with deer eating pumpkins.
Do deer eat pumpkins?