that is the most unique creature of all. Not only are they know for being extremely sly, but they possess other qualities that put them in a class of their own. However, to understand foxes and everything they have to bring to the ecosystem, you must first understand their traits and behaviors. Do foxes hibernate?

Foxes do not hibernate when it gets cold in the winter. When extreme weather hits, foxes sometimes seek shelter for a couple of days, but foxes resume their normal activities once the weather passes.

[Related Article: Why Do Foxes Scream At Night?

How Do Foxes Survive In The Winter 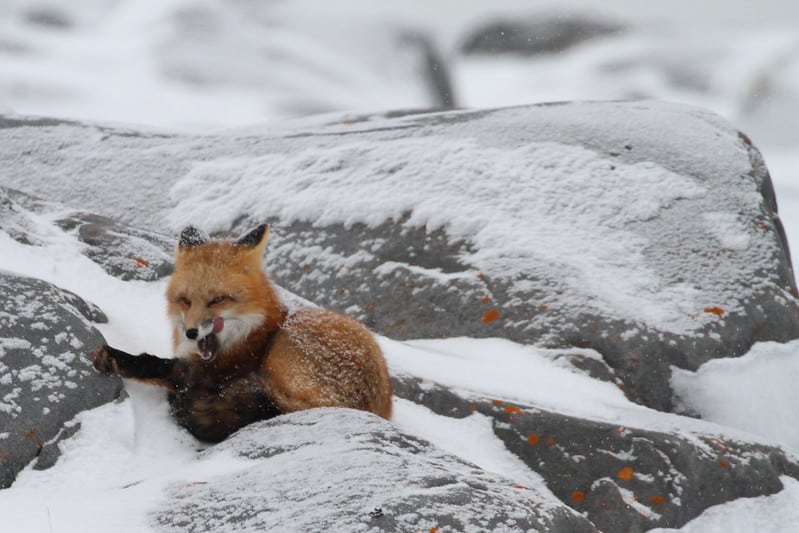 You are probably thinking right now if these animals don’t hibernate then how exactly do they survive during the winter. That is an excellent question and it is one that comes with an interesting answer.

As you already learned from above most foxes will just go about their regular hunting and foraging routines during those long winter months.

However, this doesn’t mean that they still don’t have cold weather temperatures to deal with. And, one of the ways that they combat these temperatures is by adapting.

Long before the winter, the foxes’ coat will begin to thicken, which will give them the comfort and warmth that they need to survive as well as thrive even during the coldest of months.

You might even be surprised to learn that foxes usually don’t even seek out shelter during these winter months. It would not be uncommon to come upon a fox sleeping in the open beneath a blanket of fresh snow if you just happen to be perusing the wild. That being said, there are only specific times when foxes will seek out dens and lairs.

This will be when they want to mate and when they need to raise their young. Foxes tend to breed from January until the first weeks of March.

What’s even more interesting is that most of the time the male and females will try to remain together, so that they can hunt, tend, and care for their young together. This will usually be the normal routine until the newborns turn about six weeks old.

It wouldn’t even be uncommon to find a fox under your porch or home during their mating months. In fact, there are a number of homeowners that have run into this very problem in the wilderness.

In most of these situations, it is best to turn to a pest control specialist to help remove the fox family without incident. Some foxes, especially the females, will grow overly aggressive if they feel as you are intruding on and endangering their young.

Raising Their Young During The Winter

Although both the males and females will try to stay together after their offspring are birthed, they will only do so until the pack reaches six weeks of age. During this time the father will most likely leave and go about his own business. The mother will, of course, stay behind and tend to the young.

During this time some mothers will like to build multiple dens within at least a one to two-mile hunting radius of their food source. The mothers will leave her young behind as she goes out and seeks food.

When she returns if she sees any signs of intrusion on her den she will immediately relocate herself along with the young to one of the already established shelters.

[Related Article: Can You Eat A Fox

You learned that sometimes foxes will find their way to local neighborhoods and other areas where they will oftentimes erect dens under porches or in crawlspaces. It usually is the hunt for food that drives them to these areas.

Foxes are creatures that can hunt any time of the day or night, but they prefer the dusk and dawn. These creatures also have excellent hearing and pouncing techniques that allow them to track and kill their prey in the most effective manner possible.

During the winter months, these creatures will even listen to animals moving underground or under the snow. This is when they will use a combination of stalking, pouncing, listening, and digging to get at their prey.

This is usually the process when hunting smaller prey. They approach bigger prey like rabbits with different tactics. They usually like to stalk bigger targets until they are close, but will only attack when the rabbits turn to run away.

Foxes are extremely fast as well as agile, so they won’t have a problem catching and pouncing on fast creatures.

All that aside, foxes can pretty much be classified as omnivores, as they like to eat small mammals, birds, reptiles, frogs, eggs, insects, worms, fish, crabs, mollusks. Fruits, berries. Vegetables, seeds, fungi, and carrion.

Unfortunately, this type of prey isn’t available year-round. During the winter months, these creatures will mainly find themselves feasting on small mammals like mice and rabbits. It is during the spring and autumn seasons that they will get to indulge with fruits, berries, apples, acorns, fish, crabs, and tubers.

You can see that foxes are indeed sly and innovative creatures. They will take what is give to them and make do with it, Heck, they will even take what little they have and thrive with it. Foxes might seem like harmless creatures and they are for the most part, but they will not hesitate to pounce when they feel threatened.

This is especially true when kits or offspring are involved. So, always use extreme caution if you encounter a fox and its offspring.

link to Wild Rabbit Sitting In One Place: [Top 9 Reasons Why]

Continue Reading
link to Why Do Cows Have Nose Rings: [The Truth]