A skunk is by no means an unheard-of creature. Whether you are a suburbanite or a rural resident, there is a good chance that you’ve encountered a skunk or two in your day. Maybe you have one invade your crawlspace looking for warmth during the winter months. Maybe you’ve seen one or two just roaming around your property.

Whatever the situation, taking the time to learn about skunks and their lifestyle will not only make you a more informed environmentalist, but it might prove handy in the future. So, do skunks hibernate?

Skunks don’t necessarily hibernate, but they are considered dormant during the winter season. This basically means that more than likely, you won’t see the creature out and about when the weather is at its coolest. For the skunk, this time period is scientifically known as torpor and during this time, a skunks body goes through some major transformations.

For instance, it’s body temperature will lower and its metabolism will slow. How is this different than hibernation? Unlike other hibernating animals, the skunk will remain inactive for only short periods of time, usually during the day.

Why Caution For Skunks In The Winter? 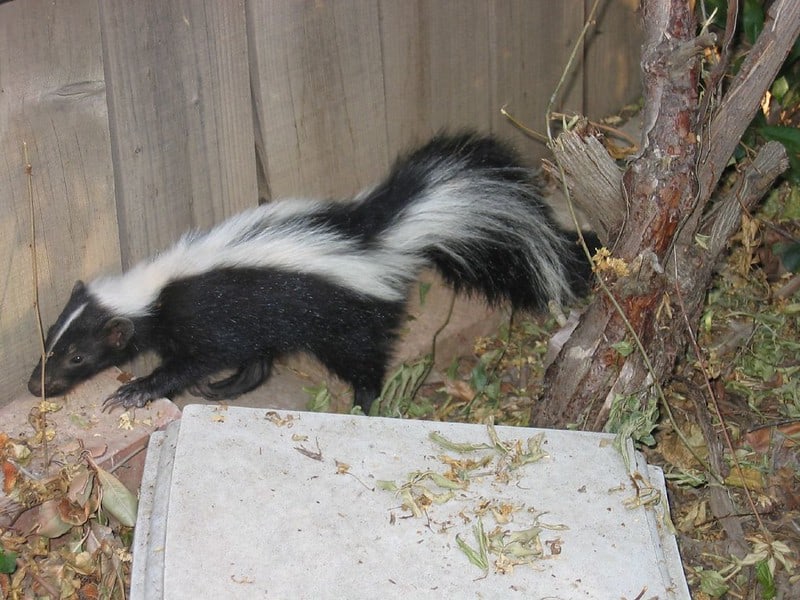 Your very first question, like many others, is why in the world do you have to be cautious about skunks if they are mostly dormant in the winter? That is a very good question and it is understandable as to why you would ask it.

The reason is that skunks usually establish what are known as communal dens during the winter. The use these dens to stay warm and keep safe.

These dens are extremely important, especially to a mother with babies. Skunks also utilize these dens during the summer months as well, and they do not like to travel far from them.

Simply put, if you’ve seen a skunk in your backyard, there is a good chance there is a communal den nearby. And, just because you haven’t seen the skunk during these winter months, it doesn’t mean that it is gone.

It is very likely nearby hanging out in its den. You obviously know that skunks are smelly and let secrete a very distinctive odor.

This is just one of the reasons that you’ll have to be very cautious of the animal. While the odor is foul, it won’t really harm you. However, they are known for harboring parasites, both internally and externally.

They’ll carry everything from tapeworms to roundworms, lungworms, flukes, as well as lice, fleas, and ticks. All of these parasites will not only pose a risk to you and your kids, but they’ll pose a risk to any pets or nearby animals.

And, this is not to even mention the fact that these parasites can carry their own set of pathogens that can potentially cause health issues in people and pets.

Simply, put you are looking at an inevitable cycle of trouble if one of these animals is infected.

Understanding Skunk’s Behavior During The Seasons

Skunks are pretty unique creatures when it comes to behavior and mentality. In fact, they can act like completely different creatures, depending on the time of the season. It will be during the early springtime that skunks are probably the most active, as they are seeking mates for breeding.

This gestation period can last nearly two months, so baby skunks will likely start showing up in late spring. Females are usually capable of generating two liters a year.

This is a pretty rapid reproduction rate, so you could not only be potentially looking at just a smelly situation, but you could be looking at a whole smelly family, lingering and causing trouble in your backyard or under your home or deck.

Also, during the summer, skunks will spend a lot of time raising and hunting for food for their young. As was just mentioned, baby skunks are usually born during April and May.

These creatures won’t even leave the den until late August. Meaning, they’ll spend their first summer learning how to search for food, make shelter, and mate.

When the first-born leaves the den it will be time to stock up on food. During the autumn season, skins will focus more on eating and fattening up to get their bodies ready for the coming winter months.

These creatures are omnivores, meaning that they eat both plants and insects. They usually like to go after smaller rodents like mice and frogs. Despite all this activity, you likely won’t spot a skunk during these months, even if you are extremely active in your backyard.

You’ll know if there is one nearby because you smell them eventually, but you likely won’t spot them, as they try to avoid human contact.

You can see that skunks might seem like harmless creatures, but they do pose quite the threat besides smell. In addition to this, they’ll sometimes tear your ductwork and insulation seeking warmth.

Spotting a skunk den might prove difficult. Not because the dens are elusive, but because they look like any other den.

In fact, a skunk den could resemble that of a pile of leaves. However, they usually like to locate these dens underneath porches, decks, patios, and shed.

These will be the best places to start looking for skunks if you fear that they are on your property. You can already see that they pose a threat and elimination should be something at the top of your list.

Also check out this site for more info on skunks and their winter time habits.
The Winter Life of the Skunk