If you are a fisherman there is a very good chance that you’ve baited your hook with a worm or two. Heck, you’ve probably stabbed that worm right on there and didn’t think twice about it. Well, you are not the only one. This is something that man has been doing since the beginning of time. Since man began making and utilizing tools to feed his family, he’s also been baiting fishhooks with worms. So, do worms feel pain? No.

A norwegian study that discovered squirming worms aren’t actually feeling pain. They aren’t squirming because they are in pain. This is just a natural reaction for their bodies. In fact, this study says that you could cut a worm in half and he would go about his regular business as nothing has happened.

The same can be said for a lobster when he is cooked in boiling water. This study was conducted by the Norwegian government and it was determined that worms don’t feel any pain when being baited or cut in half because of their extremely simple nervous systems.

That being said, this study was conducted because Norway was considering banning worms for fishing had the results came out differently.

If the results did, in fact, show that worms experienced pains when being baited, the Norwegian government was going to ban the use of worms for fishing. This was all done under the planned revision of Norway’s animal protection law, which covers a number of creatures from insects and spiders to mollusks and crustaceans.

The man who led the study said that invertebrates like worms and lobsters or even crab do not feel pains when being poked or boiled alive is because, unlike mammals, they simply aren’t smart enough to process it. Their brains aren’t being enough or complex enough to tell their bodies that they should be experiencing pain.

There are, however, some more advanced kinds of insects like honeybees that do display social behavior and the capacity to learn and cooperate. These creatures are the ones that need special care. 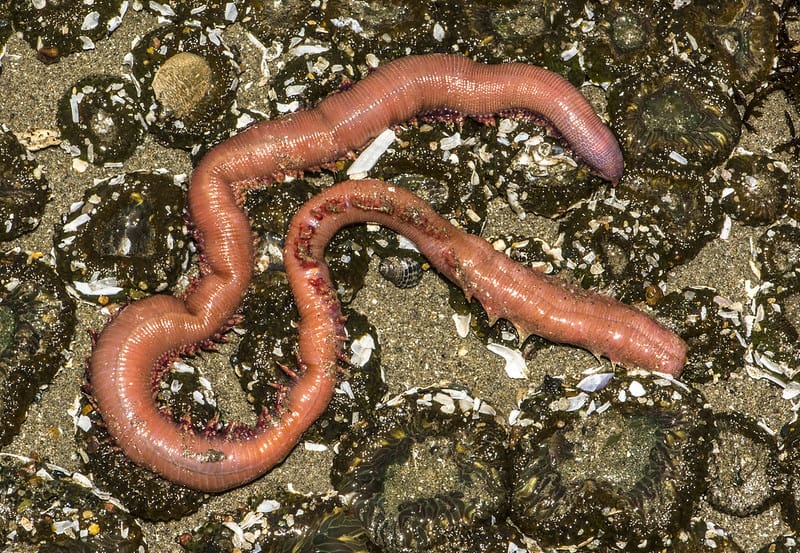 While this study was funded and highly regarded by the Norwegian government, it is entirely possible that it could be completely wrong. It was discovered long ago that brain size has nothing to do with the way the brain functions.

What’s even more interesting is that the cephalopod brain is right in the same size bracket as that of the vertebrate brain, even though they are normally twice the size. And, it has been said that cephalopods are fully capable of feeling pain.

So what’s the difference? Why could a brain in the same size bracket not be able to read pain with one creature while it can with another?

It is entirely possible that it comes down to the central nervous system. Invertebrate nervous systems are unlike the nervous systems that you would find in most vertebrates. This is the number one argument that people have been using for years now as to why these creatures don’t experience pain.

For instance, in humans, it is the neocortex of the brain that controls pain and pain waves. Since the central nervous system found in vertebrates don’t consist of neocortex or the structure for it, it has been argued time and time again that there is no pain. That being said, this doesn’t mean that it isn’t possible for different structures of the brain to be involved in different pain experiences in certain animals and species.

Just because the neocortex is the central pain station in the human body, why does it have to be this way for vertebrate? Couldn’t it be entirely possible that another structure is responsible for the sensation of pain? Something is certainly telling that worm to squirm as he is being poked with that large hook.

You’ll find that the central nervous system of worms is oftentimes compared to that of humans because they are extremely similar. It is for this reason that most people believe that worms do feel pain when they are being baited or torn in half, regardless of their size of brain or lack of neocortex.

That being said, when most people compare the human and worm nervous systems they are actually comparing the reflex arc. These arcs are combinations of sensory and motor neurons connected by what is known as interneurons. Sensory neurons and motor neurons both carry signals.

Sensory neurons carry messages from the sensory organs like the skin and eyes, while motor neurons carry signals to the muscles, telling them how and when to move.

Interneurons, on the other hand, gather signals from the sensory nerves and then decide if that movement should take place. Just like humans, worms do have a central nervous system that is comprised of many interneurons. Now, this doesn’t necessarily mean that the same number of interneurons are linked with the ability to perceive pain.

For instance, if you place your hand on a hot stove, it is going to automatically jerk back out of reflex. A few moments later, you will likely feel the effects of that hot stove.

It is possible that worms perceive pain in the same manner. It might just be a matter of the intensity of that pain.