The winter months can be grueling for animals out in Mother Nature. Nevertheless, they’ve found ways to adapt and survive. This is the case when it comes to chipmunks. Many people overlook these animals but they’re very intelligent and they’ll always find ways to overcome the hurdles that they face.

Chipmunks can enter a hibernation state. They also collect food in advance. Below, you’re going to learn more about the things chipmunks do to survive in the winter.

Chipmunks survive the winter by hibernating. However, things are slightly different with the chipmunk. While chipmunks do hibernate, they do not hibernate throughout the entire winter months. Chipmunks go through a semi-hibernation. This means that they’re going to wake up from time to time to perform essential tasks. You probably won’t see chipmunks during the winter months but they will wake up, eat, and perform a few other tasks. 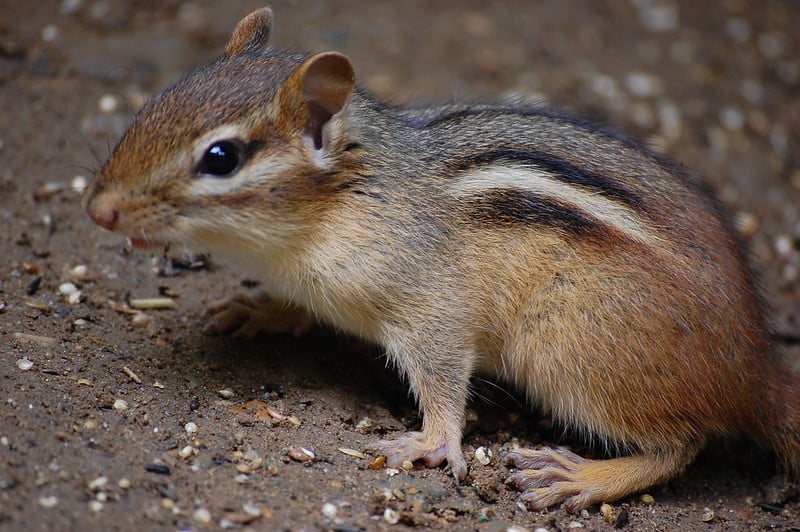 When the long, dreary winter months arrive, you will probably notice that your furry backyard friends aren’t there to greet you anymore. There is no more watching them scurry from treetop to treetop for hours on in.

Chipmunks are truly unique and one thing that makes them even more unique is the fact that they do not fully hibernate like similar creatures. Instead, their bodies go through several physiological changes that help them combat and survive the cold winter months.

First, the chipmunk’s body will enter into a state of sleep or torpor. This is a process in with their heart rate and respiration rate gets reduced greatly.

With a little research, you can discover that most chipmunks have a normal respiration rate of right around 60 breathes per minute. During the winter months, this rate can drop as low a 20 breaths per minute. In addition to this, their body temperatures fall to anywhere between 30 and 40 degrees Fahrenheit.

As of right now, this probably sounds like hibernation to most people. You would be right, but chipmunks are different because they just happen to wake up from their sleep during winter. During this period they will also consume a large meal before going back to sleep again.

Chipmunks are very smart creatures. They work throughout the spring, summer, and fall gathering nuts in preparation for the winter. They will not quit working until it is determined that there is enough food to last the entire season.

When the weather does not permit, the chipmunks will feast on the nuts that are in storage. This way, they do not need to venture outdoors in the frigid cold temperatures and snow.

According to research, one chipmunk can gather about 165 acorns in a single day. They also have stretchable pouches in their cheeks, like hamsters and gerbils. All of these animals store food in their cheek pouches, so they can transport it to their homes quicker and easier.

Chipmunks are animals that eat foods of both animal and plant origin. So, they are not very picky eaters. Their diet consists of a variety of foods, including nuts, grains, berries, frogs, insects, and baby birds.

Chipmunks work diligently to build shelters that will keep them and their young ones warm and safe throughout the winter. Like squirrels, chipmunks will build nests in trees, bushes, and logs. These animals will also build tunnel systems under the ground.

These systems can be anywhere between 10 and 30 feet in length and have an opening that is generally next to some type of man-made or natural cover.

Chipmunks gather materials, such as string, paper, grass, and straw to build their nests. They will build the nest inside of or underneath logs, shrubs, and bushes. The nests are designed to endure the harshest winter weather. Once winter sets in, the chipmunk will rarely leave its nest. 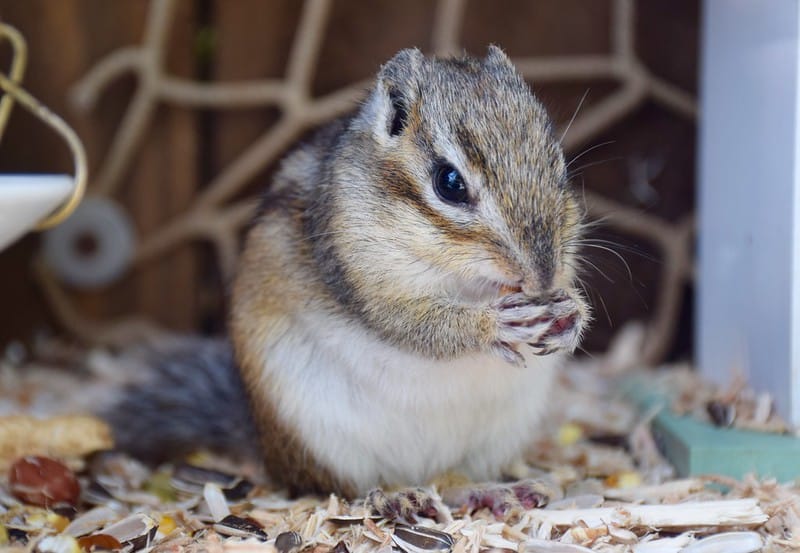 When it comes to food chipmunks can be extremely creative. You already know from the above information that chipmunks can store a great deal of food in their cheek pouches. Well, this is not the only storage option for chipmunks.

Given their ingenuity chipmunks do not just rely on a volume of food to carry them through until summer arrives. They usually depend on location as well. This means that chipmunks will oftentimes have a number of food caches.

In the event that one is ruined or invaded by another creature chipmunks will always have the option of turning to an emergency stash. Along with this, these extra food caches will also be stored far away from their usual location, which will even help mask their locations more. Chipmunks might be ingenious when it comes to food storage, but they do have short memories.

This means that forgetting where they placed these food caches is a common problem for the furry critter. This might be bad for the chipmunk, but should not be thought of as a complete waster because the nuts and other food offerings usually end up nourishing the soil.

How Often Do They Wake Up

Chipmunks are different from other animals that hibernate. They’re not going to sleep throughout the entire winter season. Instead, they’ll wake up from time to time. This sets them apart from bears.

So, how often do they wake up? In general, it is common for chipmunks to wake up every few days during the hibernation state. Below, you’ll find out what happens when they do wake up and what they do to survive during these grueling times.

Do Chipmunks Wake Up To Eat In The Winter

Remember that chipmunks are not going to hibernate constantly. They’ll wake up from time to time. When they do, they’re going to raise their body temperature to roughly 94 degrees. They’ll also snack on some of the food that they’re stored away.

The chipmunk’s normal activities aren’t going to change that much. When they exit the hibernation state briefly, they’ll eat, urinate, and defecate. Bears are different.

They’re not going to wake up at all during the hibernation state. Even if they hear a loud noise, they’ll remain dormant.

Chipmunks will wake up and perform essential tasks to stay alive. However, it is likely that they’re not going to leave their burrow during this period of time.

Ultimately, chipmunks are very smart. They’re going to store food during the months leading up to winter. After that, they’ll enter a hibernation state of sorts. This gives them the ability to preserve their food and remain warm. In a way, chipmunks hibernate like bears.

It is slightly different but the concept is similar. This is why it is rare to see chipmunks during the winter. Don’t worry though. They’ll be back when the temperatures start to increase.