Deer often live close to one another. This gives them a little extra peace of mind and helps them remain safe from predators. Since they’re going to be living nearby, they have to find out how to communicate with each other. Deer are smart creatures and they have developed an effective system for communicating with one another. There is a good chance that you’ve heard some of their sounds but you likely did not know what it was. Within this guide, you’re going to learn more about the ways that deer communicate with one another.

How do deer communicate? Sound. Even though they’re going to rely on sight, smell, and taste too. Therefore, they use numerous techniques to communicate with one another. By studying the animal’s body language, you can find out a lot about its state of mind.

Humans believe that animals are mostly going to communicate with sound. Humans speak to one another when they have something important to say. Nevertheless, body language can say a lot too. With this in mind, you should realize that deer are the same. 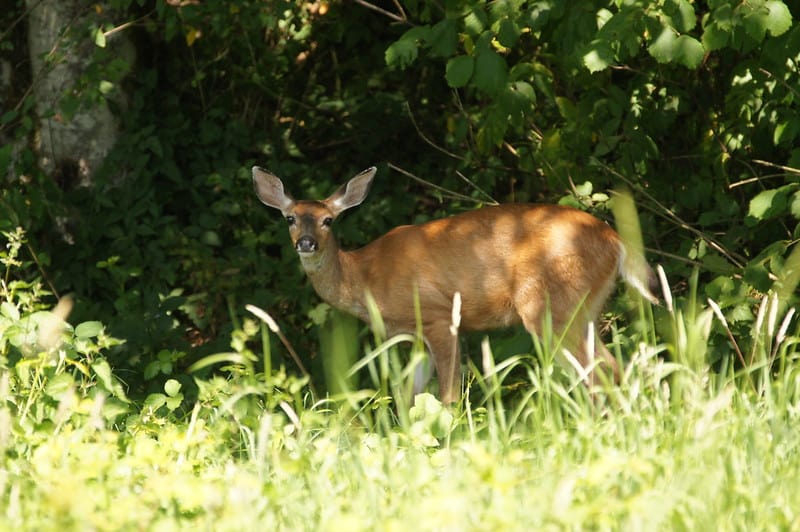 As mentioned above, it is common for deer to quickly wag or flick their tail from side to side. This means that the deer feels comfortable. They’re at ease and do not feel that they’re in danger.

You can likely observe this behavior when the deer are feeding. Some hunters claim that they can use an old tail to sneak up on deer. They recreate the flicking of the tail and this convinces the deer that they’re being approached by another deer and not a hunter.

When you scare a deer, you can guarantee that their behavior is going to change immediately. You should take a look at the animal’s tail. Once they’ve been scared, you’re going to notice that its tail will raise.

While it is running in the opposite direction, it will appear that the animal’s tail is waving goodbye. It is thought that this form of communication is used to let other deer in the area know that predators could be nearby.

[Related Article: How Do Deer Stay Warm In The Winter]

Another thing to note is that deer will utilize smells to communicate. They have several glands that allow them to produce unique smells. The glands are found in between the hooves so this makes it possible for the deer to leave a scent while they walk around.

It is believed that these smells let other deer know that they’ve been there. Simultaneously, these smells are used during the mating season. During the fall, a rut or female deer will urinate more frequently. This lets bucks know that it is time to breed.

Around this time, there is a good chance that you’re going to hear a grunt. This sound is being produced by the male deer. It tells you that the deer is happy and has found a female to mate with.

Deer can also leave their scent on branches. They’ll do so using the glands in their eyes and nose. They can also leave a scent behind by licking an object. 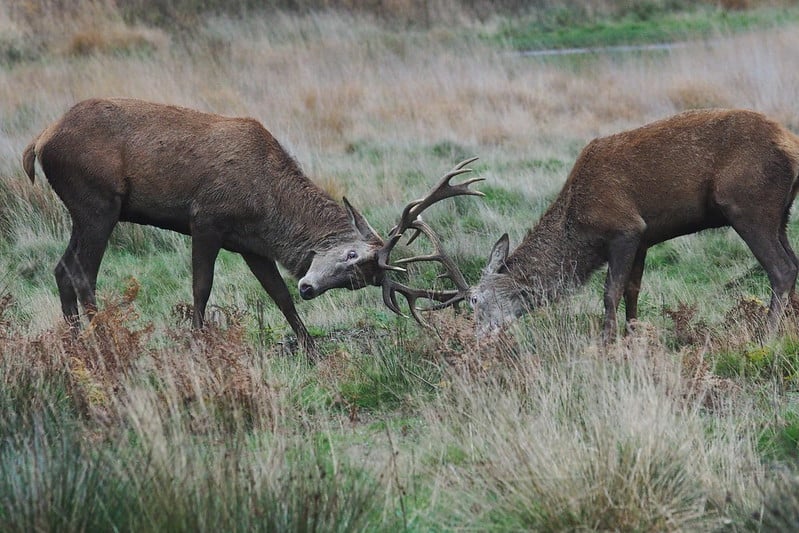 Deer are similar to humans in many ways. There is a good chance that they’re going to get into spats from time to time. When this happens, you can guarantee that you’re going to be able to hear it. You’ll hear a clicking and clacking sound. This is the animals’ antlers slamming together.

Once you’ve heard this noise, there is a good chance that other deer will circle around in hopes of watching the action. However, this doesn’t mean that a fight is certain. Before a fight begins, the animals will attempt to scare one another.

They’ll do so by making their body hair stand. This may convince their opponent that they’re bigger and shouldn’t be messed with. Either way, you should listen for those clicks and clacks. If you hear them, you might be able to witness something spectacular.

When a deer gets spooked, you can guarantee that they’re going to produce a loud noise. In common, the deer will snort loudly. It may sound like a deafening blow. If you hear this sound, there is a good chance that the deer is going to run in the opposite direction.

The noise is produced to let other deer know that danger is right around the corner. When you hear it, you may want to keep an eye out and head in the opposite direction.

While you’re at it, you should know that bucks are going to assume dominance over others in their pack. To do this, they’re going to produce an odd noise. As head of the pack, it is common for these animals to create a loud grunt. This lets the other members of the party know that they’re superior.

This can also be linked to mating. When the buck makes the short, loud grunt, it means that they’re eager to mate with a female. Or, they may be trying to challenge another buck to a fight. Either way, the grunt is one of the most common sounds produced by deer.

If you hear it, you have to understand that it could be the result of many things. If you’re out there in the fall, there is a good chance that it has something to do with mating. Otherwise, the buck is trying to claim dominance or is eager to fight with another buck.

At the end of the day, deer utilize numerous techniques to communicate with one another. They know how to make noises to get the attention of other deer nearby. They’ll also rely on their tail to communicate silently.

When you approach a deer, you should pay close attention to its tail. This can tell you a lot about its current mindset. If the tail is flicking from side to side, the deer is relaxed and does not feel any danger whatsoever. If the tail is straight up, they’re worried or frightened.