Rabbits are much smarter than people give them credit for. This is certainly the case for rabbits that are forced to survive out in Mother Nature. These animals will find a way to survive no matter what. Even during the cold winter months, they can find ways to make it through. How do rabbits survive winter?

Rabbits are not going to remain out in the cold. They cannot. If they do, they’re not going to survive. Instead, they need some type of shelter to keep them warm during the winter. One thing that they’re going to do is find a burrow.

As you should already know, a burrow is a small tunnel or hole that has been dug by an animal. That tunnel will be used as the rabbit’s dwelling during the winter months.

However, it should be noted that some rabbits are not going to dig burrows. Instead, they’ll go out and find burrows that have already been dug. This allows them to save their energy for things that they deem more important.

This is the case with the eastern cottontail. It will not dig its own burrow. It will use burrows dug by others. Or, they may decide to take shelter under woody vegetation. 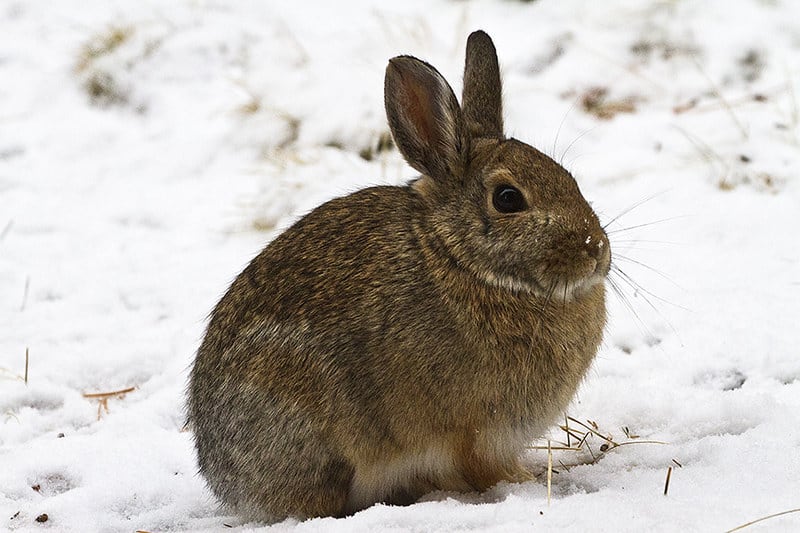 It is true that rabbits will need to feed on something during the winter months. This creates a big problem for them. After all, the cold weather is going to kill much of the foliage. In return, the amount of food available is going to decrease significantly.

Therefore, rabbits will need to think outside of the box to obtain the nutrients that they need. So, what do they eat during these months? It is common for them to eat bark collected from shrubs, perennial plants, and young trees. They can still find food but it does become more difficult.

In fact, you might be surprised to learn that rabbits mostly treat the winter just like they do any other time of the year. Of course, to say that don’t prepare and take precautions would be going a bit far, but for the most part, the innate behavior and regimens of these animals do not change.

During the winter rabbits might not be as active or their appetites might even drop off, but these are just amongst a few of the changes that rabbits can go through during the winter.

If you see a pet rabbit or have a rabbit in your backyard acting in this matter there is no cause for alarm. This is just natural behavior during the winter months. Rabbits will tend to sit and stay in one location to conserve their energy and food reserves.

Active Early In The Morning And Late At Night

The above statement does not mean that rabbits are completely idle during the winter. They might be able to slack off on their appetites and conserve food, but there will come a time when the hunger grows too much to bear. This is when rabbits will forage.

This will usually take place during the early morning of the hours or the late hours of the night. In fact, this is just one of the main reasons that most people don’t see rabbits running around their backyards during those long, winter months.

READ  How Do Chipmunks Survive In The Winter: [Hibernate?]

These times of the day and night provide perfect a perfect foraging environment because the weather is not only milder, but fewer predators are on the hunt. 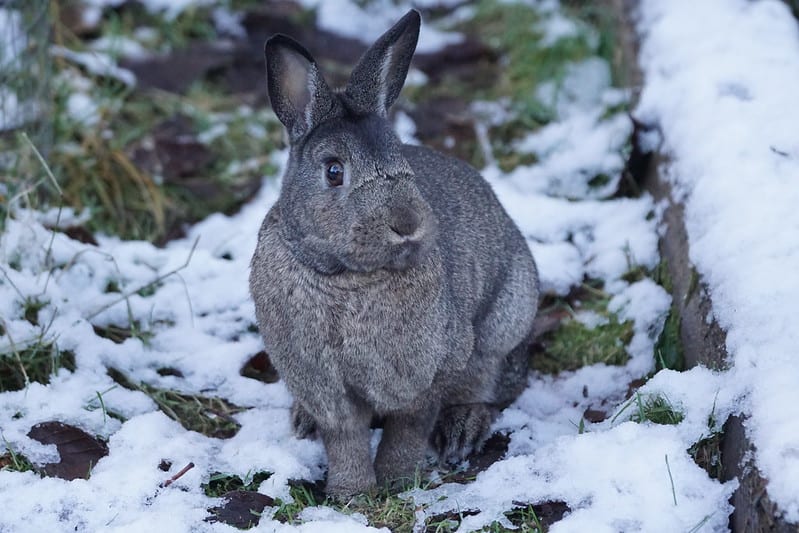 Rabbits are mammals and it is a well-known fact that most mammals hibernate during the winter. So, what’s going on with rabbits? Why don’t these mammals hibernate? Well, rabbits indeed undergo severe behavioral and diet changes, but they still don’t reach the point of hibernation.

Most mammals turn to hibernation because of the scarcity of food. If they didn’t hibernate it could mean an end to their survival. This is not the case with rabbits. Rabbits always have an abundance of food available to them, even during those long, grueling winter months.

Rabbits and some other mammals, such as guinea pigs and beaver, have a unique way of digesting their food. This digestion process is called cecotrophy.

When rabbits eat, the food passes through the intestines and is eventually reingested for additional nutrients. Through cecotrophy, rabbits can safely survive harsh winters while only eating twigs, tree bark, and bush buds.

The byproduct of cecotrophy is known as cecotrope. During the cecotrophy digestion process, food travels through the gastrointestinal tract, which consists of the mouth, esophagus, liver, stomach, gall bladder, pancreas, small intestines, large intestines, rectum, and anus.

What makes cecotrophy so unique is its utilizes reverse peristalsis to push food back into the caecum or cecum. Here, the food is broken down into monosaccharides, simple sugars, by another process known as bacterial fermentation.

The cecotrope is eventually eliminated through the rectum. At this time, the rabbit will reingest it. Cecotrophy takes anywhere from four to eight hours to produce cecotrope. When rabbits eat cecotrope, they do it in the same manner as cows do when they chew their cud.

Cecotrope provides additional nutrients to the rabbit’s diet. So, they can wait longer to eat between meals.

Can You See Rabbits During The Winter

Many mistakenly believe that rabbits are going to hide away throughout the winter. This isn’t the case. You can still see rabbits during the winter months. However, you need to look around at the right times. In general, you should try looking for rabbits around dusk or dawn.

The weather is slightly milder during this time of the day so you can probably spot a rabbit at this time. It is common for them to come out around these times to forage for food.

Another thing to note is that some agencies have begun providing rabbits with supplemental food. This is true for the New England Cottontail. This species has been reduced by as much as 86% during the past 50 years.

With forests around the world shrinking, this species of rabbits are forced to travel further for food and that increases the likelihood that they’re going to run into predators. By providing them with supplement food during the spring, summer, fall, and winter, they have a much greater chance of surviving.

As you can see, rabbits have been through the rough winter months before and they’ve found ways to adapt. Their survival skills are far better than what most people give them credit for.