Squirrels are intelligent creatures that know how to adapt to the circumstances that they encounter. They’ll find a way to survive no matter what it takes. Before the winter months arrive, squirrels will begin preparing for the harsh cold weather.

They know what they need to do to survive and they’ll put in painstaking effort to do just that. So, how do squirrels survive the winter? Within this guide, you’re going to learn all about their survival techniques.

How do squirrels survive the winter? Squirrels find shelter. They know that there are going to be predators out there. Therefore, they have to find a safe, warm place to wait out the winter. 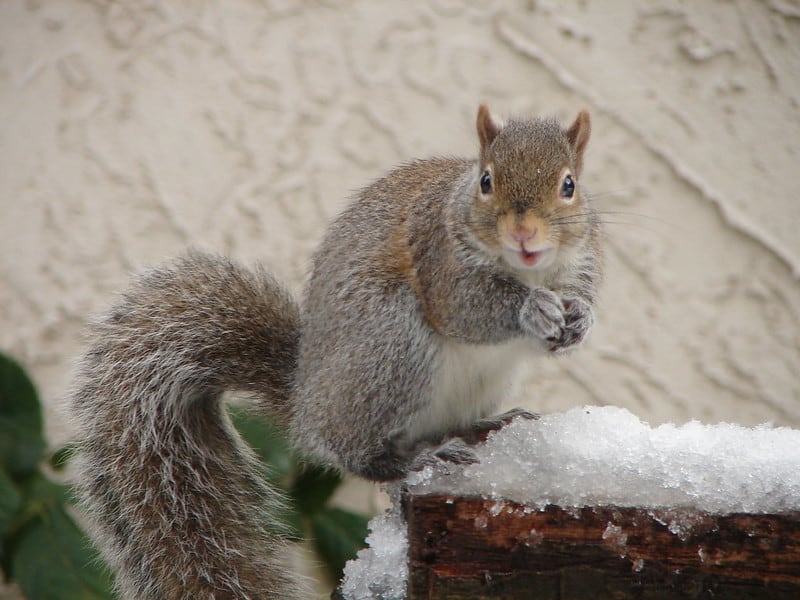 The squirrel diet consists of plants, nuts, insects, small vertebrate, such as frogs, and seeds. Some squirrel species will also eat wild bird eggs and fungi. Like ants, squirrels dedicate most of their time building shelters and searching for food.

Most squirrel species have 20 teeth, which are made up of 16 molars and two upper and two lower incisors. The incisors are utilized for gnawing nuts, twigs, and other hard objects.

The Eastern gray squirrel has two extra pre-molars, with a total of 22 teeth in all. To prevent the teeth from wearing down, the incisors continuously grow throughout the squirrel’s life. Squirrels are also continuously sharpening their teeth on hard objects.

It is common for ground squirrels to seek shelter underground. They’ll find places that are roughly one meter underground. This will keep them safe and allow them to ride out the winter without too much trouble.

Other types of squirrels will seek shelter in tunnels. They’ll use tunnels in garages, barns, dead trees, and more. There is a chance that their hiding place will provide them with an ample food source too.

For instance, they might take shelter in a hallowed tree that has collected nuts or seeds. This would be common in a garage too. If they do not find a food source, they’ll begin collecting and hoarding the food.

There are many unique species of squirrel. This is one thing that throws people for a loop. Ultimately, some squirrels are going to remain active during the winter months. Others may not.

Some will enter a state of hibernation which is referred to as torpor. This allows them to stay alive during the cold without needing to eat as much. Squirrels that remain active are going to store up on fat during the months leading up to the winter.

They’ll be able to survive on that fat storage if necessary.

Living Quarters In The Winter 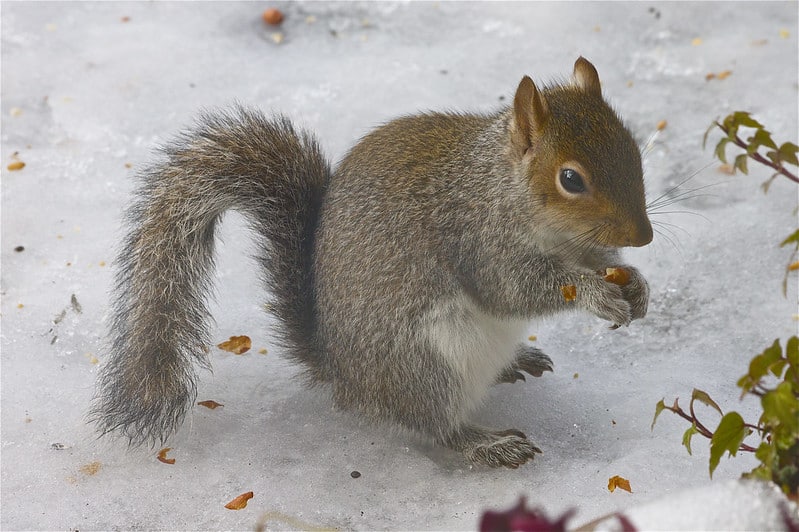 Squirrels might not be a species that hibernate during the winter, but they certainly keep their activity to a minimum. And, why wouldn’t they? They are already one of nature’s smallest preys and the winter only poses more threats.

This is why during those long winter months most squirrel species can be found in underground or hollowed-out trees. Preparing these homes for the winter can take months or sometimes even all year to construct, depending on the complexity of the system.

For the most part, these squirrels will stay close to these burrows during the winter months. However, is the temperatures are not below thirty degrees or it isn’t snowing or raining there is a good chance that you might spot a squirrel or two out foraging.

If they aren’t out foraging then they might be out checking a local cache.

This is especially true when it comes to the red squirrel species of squirrels. These squirrel species are not only highly intelligent, but they are more innovative than any other species. Just look at their culinary approach during the winter.

During the winter months, the red squirrel will go as far to hang mushrooms on tree branches where they will later dry out and turn into jerky. This tasty and protein-filled snack can then be consumed for nutrition and supplementation during those cold, long winter month.

Filling Up For The Winter

There is no denying that red squirrels are inventive and innovative, but some squirrel species don’t approach winter in this manner. There are some species that will just consume much food before the winter and let that sustain them during those long months.

Some species can even consume as much as their entire body weight. It will be this fat from these meals that will help stave off hunger pains when food is light and scarce.

Squirrels And Your Property

There is no doubt that you’ll want to protect the squirrels in your yard. Nevertheless, you have to worry about the damage that they’re going to do to your property.

Squirrels can cause damage to your house and your yard. If squirrels burrow in your lawn, there is a good chance that they’re going to damage your plants.

This is something you have to be careful about. They can also hurt your yard when they forage for food. Finally, you should take steps to keep the squirrels out of your garage and attic.

They’ll attempt to stay in these places during the cold winter months. It is best to keep them out. As long as you do that, you’ll be able to protect the squirrels without letting them damage your property.

For more info on this checkout, 7 Humane Tips For Getting Squirrels Out of Your House.

The Sciuridae family consists of a variety of species. These species include the chipmunk, marmot, ground squirrel, tree squirrel, prairie dog, and flying squirrel. These rodents range from small to medium in size and can be found in America, Africa, Australia, Europe, and Asia.

The largest rodent of the Sciuridae family is the Alpine marmot, which weights between 11 and 18 pounds or 5 and 8 kilograms. The Alpine marmot, also known as the “ground-dwelling squirrel, is found in Southern and Central European mountains.

Squirrels are very easy to identify because of their bushy tail. The thickness and color of the squirrel’s fur will vary from one species to another. Some squirrel species do a lot of climbing to avoid predators and search for food.

Their strong claws allow them to ascend and descend the tallest trees in seconds.

Ultimately, squirrels have a lot of work to do before the winter months arrive. They’re going to begin foraging for food and preparing a shelter. If they do not work quickly enough, they might run out of time. These animals have felt with the harshness of Winter from the beginning.

They know what they have to do to survive and they’re going to do just that. Thanks to these instincts, they’re able to survive to enjoy the warmth of Spring when it rolls around.