To some people, mockingbirds are beautiful entertaining creatures. To some, they are a nuisance that just creates a mess while also attracting snakes. Whatever the situation is, there is no denying that these creatures are vocal. They’ll mimic the sounds of other animals and birds.

This is just something that is in their nature. Not only this, but they like to produce these sounds in succession very loudly. You combine this with the fact that they leave bird poop everywhere and you can easily see how this could drive some homeowners mad.

If this is something you are currently dealing with don’t fret because there are multiple ways that you can go about getting rid of the creatures.

How to get rid of mockingbirds? Predator silhouettes. That means make cutouts of hawks and/or owls and place them strategically around the area. That should scare it off, as long as it isn’t nesting.

Of course there are other ways also, read on.

[Related Article: How To Attract Cardinals And Blue Jays]

Tools Needed For The Job

Despite their looks, mockingbirds are extremely persistent creatures. If you’ve ever tried to get rid of them then you likely already know this.

If you do not scare them away, you’re going to have to bear sleepless nights and restless days, as they set and shriek at the tops of their lungs.

Unfortunately, eliminating these creatures completely won’t be an easy task. The first thing that you are going to need to do is to get some tools in order.

While you might be to the point of killing these birds, this is something that you want to avoid. In fact, it could be considered illegal and you might end up in jail for it or facing stiff penalties.

Of course, this is something that is immoral and should be avoided at all costs. Luckily, you don’t have to go that far.

You can simply scare them away with a powerful squirt gun. If you do not have access to a water gun, you can always just use a water hose or nerf gun. Something along these lines should get the job done, but you’ll want to make sure that you avoid BB guns or airsoft rifles.

I highly recommend this squirt gun, you can find it on Amazon here, 1200cc water gun. Shoots 35 feet, and trust me, it works and it won’t hurt the bird.

You are obviously going to need water to power up your squirt gun. Most people usually have an exterior faucet installed on the side of their homes with a hose attached, but in the event that you do not, you are going to need access to some kind of water source.

If you are using a nerf gun or something along these lines, you won’t have to worry about the water, but just be aware of the fact that you might end up losing some of your foam bullets trying to drive away these pests.

Flashlights are going to come in extremely handy when trying to eradicate the birds at night, as they will help you detect where the birds are hiding. They’ll also come in handy when it comes to sweeping the area.

You are likely pretty familiar with the area or tree that the birds are occupying, but it never hurts to give the area a once over just to make sure that there aren’t any dangerous obstacles nearby. You don’t want to end up spraying a power line with water.

Binoculars are another item that will come in handy. If you don’t have binoculars, you can always take opt for a telescope, rifle scope, or something similar. This item pretty much serves the same purpose as the flashlight.

You’ll want to check the area without getting too close. If you are lucky enough, you might even have access to night vision goggles and this will eliminate the need for both of these items.

A good set of earplugs will come in handy when trying to eliminate these creatures. When mockingbirds are in search of a mate, they’ll sing all day and night long. They’ll sing if they are lonely.

They’ll try to mimic the sounds of other animals and birds. And, of course, they are going to screech and scream when you are trying to scare them away.

Earplugs could not only help you get a good night’s rest while the creatures invade your home or backyard, but they can be used when you are driving them away as well.

When you have all your items in check, you’ll be ready to move on to the elimination process. Just remember that these animals fall under the Migratory Bird Treaty Acts so harming them in any way is out of the question.

Prepare For The Attack 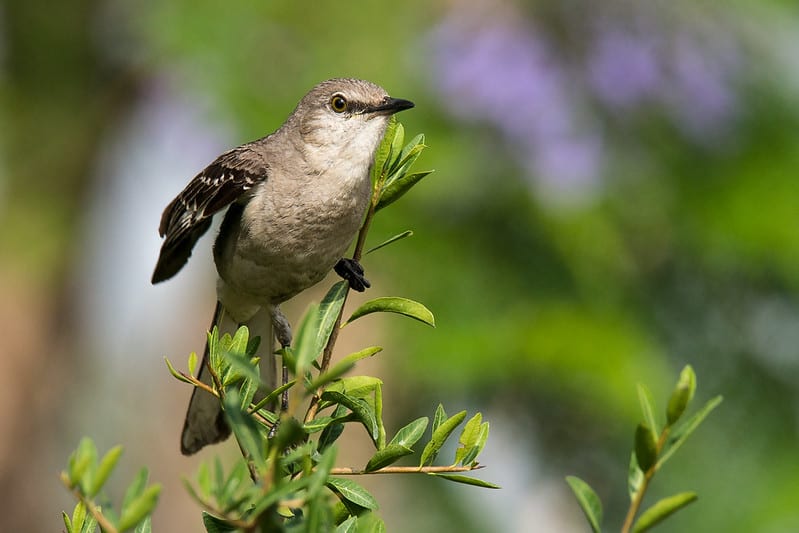 First, you are going to want to locate exactly where the birds are. If they are in a bird tree and out at night, you might have to take advantage of those binoculars and flashlights. You’ll want to know exactly where they are in the tree before you pull out your water gun or water hose. Once you are all set, simply turn on the water or let loose with your nerf gun and attack the birds,

If you think that shooting the birds with water is going a little too far there are other methods that you can use. You can set up predator cardboard cutouts like hawks or owls.

This might scare the creatures away, but you should know that mockingbirds can be extremely territorial and are by no means afraid of a fight.

All you have to do is cut out the mock creates and nail them to the nail. This might require the use of a ladder and other items, but it is a much gentler method of elimination.

You get a hawk decoy on Amazon here, Hawk Decoy.

Why You Want To Get Rid Of Mockingbirds

Many people set up birdhouses on their properties, so they can attract them. Well, that will never be said about a mockingbird. While these birds help in riding properties of small vermin, they can at times be very loud and aggressive.

In fact, the mockingbird is more often described as “the most aggressive and annoying” in the bird species.

If you live in close proximity of a mockingbird nest, you will agree with these individuals. The closer you come near a mockingbird or its nest, the more aggressive it will become.

While mockingbirds are considered “harmless” to humans, they will attack those who try to tamper with their nests. This is only a natural protective mechanism shared among the species.

Mockingbirds are also known to attack domestic animals, as well as wild animals. Truly, they do not know the difference between the two. The only thing they know is that protecting their nests must come before anything else.

So, if your cat or dog goes near a mockingbird nest, the odds of it getting attacked is very high. This is especially true for cats that are known for invading bird nests.