Hickory firewood is a well-known type of firewood. There is a good reason for it too. In this article, I’m going to cover all facets of the firewood, from cutting it and splitting it to seasoning time and even the BTU’s of hickory firewood. So, let’s get to it! 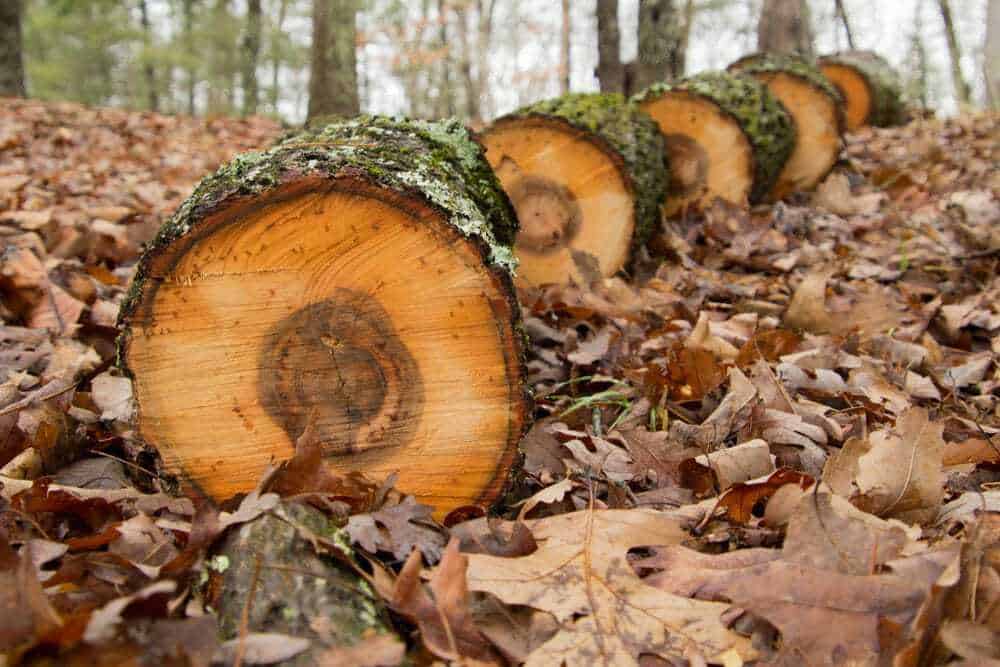 Yes, it is! To me, it’s better than oak and maple because of the heat it throws. This stuff will not disappoint. And the reason is, It’s a heavy and dense hardwood. And that’s what you want in the wood your going to burn.

There are many types of hickory, with that said, they all burn great. So, your good to go if you want to burn this stuff. You’ll pat yourself on the back later for doing so!

Splitting hickory is a different story. This stuff is dense like mentioned above, and because of that, I’d recommend a hydraulic splitter. It splits hard if your splitting by hand. It’s a good workout. As they say, firewood keeps you warm twice. This case it holds very true.

Some tips I can give you to make it a little easier on you is, find the cracks in the round and use it as your starting point. That’s where the round of wood is the weakest. And don’t swing for the middle of the round if your using a maul or splitting axe. Aim for the end that is in line with the crack.

Here is a video of the joys of splitting this stuff.

Splitting hickory is the only knock on this wood. Otherwise, it is golden. If you want to learn more about splitting using hand tools, check this out, How To Split Wood By Hand.

Ok, So you got your hickory firewood cut, split and stacked. Now, your wondering how long you have to wait till you can throw it in the woodstove or fireplace. Well, 11 months to a year should do it maybe even a little earlier. Hickory doesn’t hold a lot of moisture compared to other hardwoods because of its density.

There is one thing I want to mention. Don’t be surprised to see sawdust/bug dust on or under your stack of hickory. Bugs love this stuff. And they bore into it. And if they ignore the eviction notice and stick around, they’ll help heat your house or shop too.

You might want to look into a moisture meter to test the moisture content before you burn it. You can find them on Amazon for a decent price. Here is a link to the one I have. Moisture Meter (Link To Amazon). Just make sure its 20% or lower and it’s safe to burn.

BTU stands for British thermal unit. And the higher the number the more heat the wood produces and, of course, the lower the number the less heat it produces when burned. With that said, hickory BTU is between 26 and 28, depending on the type of hickory you have.

Just to give you an idea of how good the BTU of hickory is. Its higher than oak, maple, and locust. Now that’s saying something! Many people consider those types of firewood the best you can get but yet hickory tops all of them.

If you want to learn more about this, check out my article on BTU Of Firewood. It includes a chart of other firewood BTUs.

Is hickory good firewood? Well, In my opinion, hickory is the top dog when it comes to firewood. Many will argue against it because they don’t believe it’s worth the hassle of splitting. And, if your splitting by hand you would have a valid point. But if you have a hydraulic splitter I would highly recommend hickory. No doubt about it!

Alder Firewood If you are confused about using alder as firewood, then this article is for you. Alder is a hardwood tree found in moist surroundings, and it belongs to the birch family. The most...

Continue Reading
link to Best Wood For Campfire: [Top 5 Of All Time]

Best Wood For Campfire For all the adventure lovers and thrill-seekers, camping is an all-time favorite. It's the perfect way of getting away from the boring day-to-day life while learning how to...

Just an ordinary guy who loves burning wood. I made this site to help others understand firewood a bit better. And everything that goes along with it. On this site you'll learn everything I've learned along the way. Been doing this stuff for a little over 10 years.