Ah, the fox, one of nature’s smartest and sliest creatures. You’ve likely heard someone use the phrase “sly as a fox.” Have you ever wondered why this phrase was coined or when it came about?  Well, what you need to know is that it is true and people say it for a reason. Foxes are pretty unique creatures with a long and storied past.

You’ve likely got something in there that he considers a food source. Whatever the situation is, you don’t want a fox roaming around your neighborhood, let alone your yard, so it will be pertinent to understand exactly foxes eat and what might be attracting this one to your yard.

What do foxes eat? Foxes are considered an omnivore, which means they’ll eat both meat and plants. They mainly like to focus on small animals like birds, rabbits, rodents, frogs, mice, insects, and fish, but it comes down to the species and what’s currently available.

If there is a fruit, vegetables, berries, seeds, or even fungi around, the fox won’t be hesitant to indulge.

That being said, foxes are without a doubt one of the most prolific creatures on this planet, as they exist on every known continent except for Antarctica. So, answering the question of what foxes eat can be more complicated than just meat and plants.

To get a better idea of the various types of foods that foxes eat, you’ll want to get better acquainted with the fox as a species.

The General Diet Of A Fox 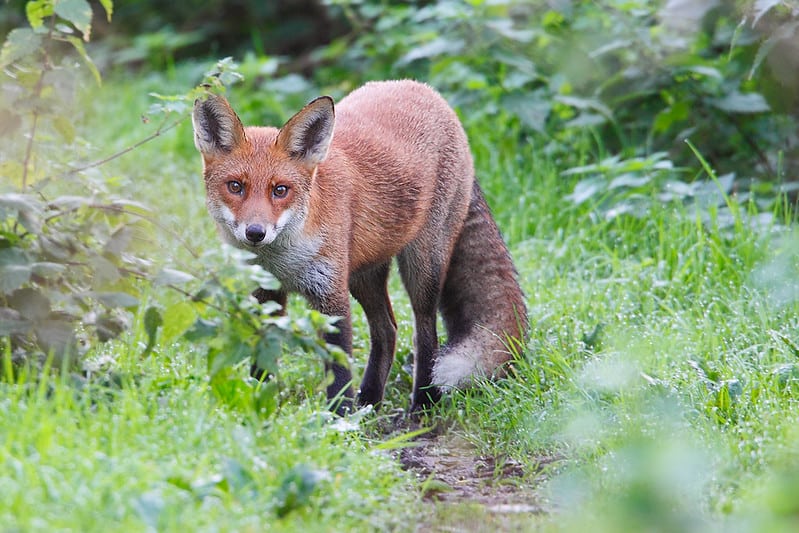 As was already mentioned above, the fox is considered an omnivore, which means that he’ll eat both plants and meat. This pretty much means that they’ll eat a large variety of foods including wild grasses, mushrooms, berries, fruit, and grain.

As far a fruit goes, they seem to enjoy apples and blueberries in particular, but won’t turn down whatever they can find if they are hungry enough.

While the fox can eat plants, they prefer more of a carnivorous diet consisting of smaller animals. This would include mice, birds, voles, eggs, and amphibians. Snakes, hairs, and mice are just amongst some of the fox’s most preferred meals.

Birds are usually consumed less often because they are much harder to acquire.

Foxes usually require right around half a kilogram of meat a day, but can compensate with other types of foods if not available.

When you hear the term fox what you picture in your head is likely a member of the Vulpes, Urocyon, or Lycalopex species. The Vulpes species can include arctic foxes, Bengal foxes, Fennec foxes, and Red Foxes.

The Urocyon is usually just the Gray fox, while the Lycalpex species can consist of the Pampas Fox, the Darwin fox, and the South American Gray Fox.

It is probably obvious by now that these various species are going to have different behaviors, reproductive cycles, and of course diets. It is true that most foxes are what would be considered pack animals, but this does necessarily constitute for all of them.

Sure there is a great deal of the species that will live in large to small families or groups, but there are also some species that are complete loners.

This would be the arctic fox, as he enjoys and prefers his solitude. One thing that all species do share in common is that they are prolific and not generally considered endangered.

Why Foxes Can Be A Problem

There are many people that advocate for both the town and country fox. However, these individuals still realize the real threat that these creatures pose, so they by no means take them lightly.

And, you should follow that same path. While the fox might appear dog-like, cute, and cuddly, it can be anything but.

This is especially true when he is one the hunt or hungry. In fact, any hungry creature in your yard looking for a food source is never a good idea because it likely means that there is one nearby and they’ll not hesitate to attack you, your pets, or your kids to get after that food source.

Foxes will be no different, regardless of how harmless or domesticated they may seem.

That being said, this is just one of the reasons that you’ll want to eliminate your fox problem as soon as possible. Another is that they can wreak havoc on your yard, garden, or flower beds.

In fact, one of the most common complaints that most exterminators dealing with foxes hear is from people wanting advice on how to discourage foxes from fouling on their lawns and digging up their flower beds.

Foxes are obviously attracted to rabbits, chickens, and similar prey. If you are housing animals like this in your yard, they will be in real danger is there is a fox lurking nearby.

As far as cats and dogs go, there have never been any reported cases of a fox attacking such animals, but this does not mean that it is out of the question.

Once again, this will be something that you don’t want to leave up to chance, especially if the fox is running on empty.

[Related Article: Why Do Foxes Scream At Night?]

Foxes are wild creatures and they are out and about, exposing themselves to the harsh elements of nature and everything that it has to offer. It is not uncommon for a fox to get infected with some kind of disease.

In fact, Weil’s Disease is one of the most common types of diseases that they are known to carry.

However, you’ll be relieved to know that it is very likely for a fox to pass this disease to a human. As a matter of fact, from the years 1990 to 1996, there have only been 85 cases of Weil’s disease reported in humans. Yes, the fox can pass this disease on to a human, but it is highly unlikely.

The transmission of this disease is usually through urine contact of the infected animal. This means that’d you have to come into contact and interact with the urine of an infected fox to contract this disease.

Toxocariasis or most commonly known as roundworm is another disease that foxes are known for housing. Transmission to humans is usually through the ingestion of viable eggs from contaminated feces, which will be highly unlikely.

In the worst case, you’d likely eat a piece of fallen fruit that has come into contact with one of these eggs.

That being said, it is not all that far fetched that a cat or dog might come along and ingest some of these eggs. If this is the case, you can use simple worming treatments in both cats and dogs and it should clear up any issues.

As far a humans go, the symptoms can range anywhere from symptomatic infection to an eye infection. Luckily, once identified this condition can easily be treated and/or prevented from getting this far.

The eggs that cause the transmission of the disease will usually need to mature in the soil for 10 to 14 days before they become ineffective and die off due to desiccation.

Foxes can also carry what is known as Sarcoptic Mange. This is a type of mite that has on many occasions been blamed for causing scabies in humans.

However, it has been proven over time that this is not the case at all. Sarcoptic mites are only a threat to dogs, as they’ll usually only just cause allergic reactions in humans that can easily be treated with the right medications.

Luckily, these mites can also be treated if they come into contact with your dog. You’ll just need to get in touch with a certified vet.

At the end of the day, you can see that foxes don’t really pose that big of a threat when it comes to diseases. Sure, there are those rare cases when an infection of some disease can lead to something serious, but for the most part, any disease that the fox can pass on is fairly treatable and preventable.

Although the fox is not known for carrying or passing on any real dangerous diseases, it is best not to have one lurking around your home or neighborhood. If this is the case, he is likely after something to eat.

You can see from the information above as to what foxes like to diet on. Eliminate these sources and you’ll eliminate your fox problem. They’ll likely move on seeking greener pastures.

Continue Reading
link to What Do Skunks Eat: [Complete Guide]

Skunks are pretty well-known creatures throughout the animal kingdom. They are also known by most home and building owners for emitting an intolerable stench. This is usually something that...