Most people out there probably fear the bear. And, this is with good reason. They are immense creatures with a propensity for violence. Given the right situation and bear simply won’t hesitate to attack you, your kids, or your pets. When most people think of the food chain, they would place the bear right at the top.

And, this would be a fairly accurate assessment. However, you might be surprised to learn that there are some animals out there that aren’t afraid of the bear. In fact, some animals are so brazen and confident in their skills that they’ll hunt the bear as prey.

The list of animals that hunt, kill, and eat bears is fairly short. In fact, you’ll find that it is only apex predators and carnivores that are brazen enough to attack a bear. The long answer to this question is that it can really depend on the type of bear, where it resides, and the size of the bear. 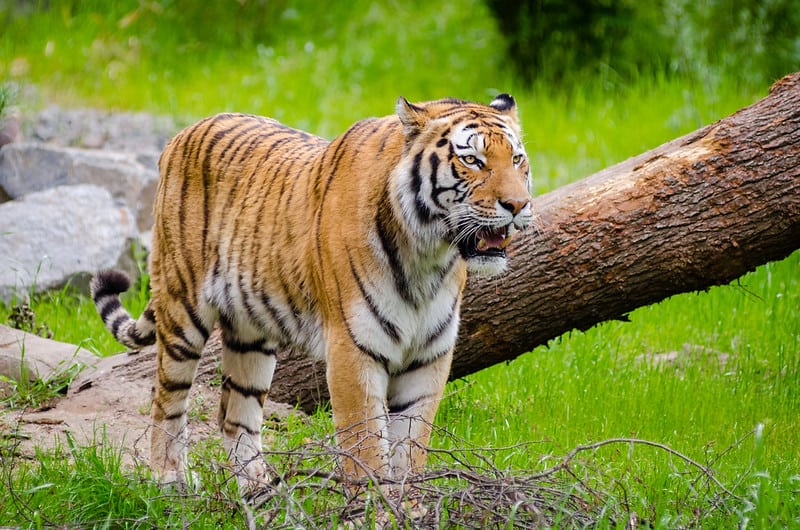 As far as natural predators goes, it is the human and the tiger that the bear has to fear. That being said, some individuals would probably throw wolverines and mountains lions in here as well, but it really depends on the right circumstances.

Mountain lions and wolverines would likely only attack and eat bears in certain situations.

Speaking of certain situations, it is the element of surprise along with superior ambushing skills that give the tiger the upper hand against the bear. Given their specific skill set, the tiger really has the ability to overpower any animal, although they rarely attack bears.

The reason they are hesitant a lot of times is because without surprise on their side they are just too evenly matched. Their skills and strength are right there on an even plain. The tiger just doesn’t see it as being worth the risk.

However, this is not always the case in Asia. In Asia, tigers grow to be much, so they will sometimes attack and eat small to medium-sized bears.

People have long debated whether or not wolves actually prey on bears. There are tons of trappers, hunters, and guides that claimed to have found bear hair amongst wolf droppings. There is also plenty of known cases where bears have fled in the other direction when wolves were present.

There are also documented cases of wolves attacking bears in their dens. And, this probably has everything to do with numbers. Numbers always play a key role in the wild, and wolves are rarely known to go anywhere alone.

When hunting, they usually hunt in packs so if they came across a single bear in a den, they probably wouldn’t hesitate to pounce.

They’ll also use their numbers to harass and wear down the bear until it is tired enough where it won’t be able to put up much of a fight. A wolf would have to be pretty hungry to risk going after a bear, so this is something that you’d see more commonly in the winter when food is likely scarce.

You might be surprised to learn that it is even fairly commonly for bears to eat other bears. However, this is usually only just the case with male bears and cubs. Male bears will sometimes eat cubs. However, they won’t eat their own cub. The cub will have to be one that belongs to an entirely different family.

The same would more than likely go for the grizzly bear and the black bear. Just keep in mind that these situations and scenarios are extremely rare, but not completely unheard of.

The bear is a terrifying creature given its size, speed, and strength. Regardless of the species, most people aren’t going to think twice about avoid a bear. That being said, you can clearly see that there are some creatures brazen and skillful enough to take down a bear and eat it.

Humans are even known for hunting and eating bear under the right circumstances. Of course, they need the help of various tools and weapons to do so, but none the less, they will attack, kill, and eat bears.