is no doubt one of the most magnificent and interesting creatures out there. It is also one that is surrounded by sage and mystery. Many people think they might know the owl and everything about it, but this isn’t entirely the case at all. In fact, did you know that some species of the owl migrate, while others hibernate? So, where do owls sleep?

Most owls like to sleep in crevices, abandoned buildings, hollow trees, or perched on the high branches of their habitat. Catching an owl sleeping has proven to be a difficult task all on its own.

Given that they are nocturnal creatures and extremely light sleepers, they are rarely found in areas frequented by humans during the day.

You can see from just that tad bit of information that owls are truly interesting and mysterious. However, here comes the really interesting thing. Did you know that some owls sleep face down? That’s right, they’ll knock out on their bellies similar to that of humans.

While this is rarely known throughout the world, it is something that social media is bringing more and more light to. Just go search for videos or pictures of owls sleeping face down and you’ll no doubt find tons of them.

That being said, if you come across one of these owls in this position, it’d be best to leave it alone.

While you might think it is dead, you’d probably be best just to move on and go about your business. This would no doubt be a surprising sight to see, but owls aren’t going to take to kindly to being startled out of sleep. They might even attack.

There is one journalist by the name of Mark Rees that has brought a lot of light and attention to this phenomenon. He has shared several pictures with the Internet and has tweeted about the topic on multiple occasions.

He has also coined the theory that they sleep like this because their heads are too heavy for their bodies.

His tweets have received nearly 150k likes and he now has several Internet series out there regarding owls and their sleeping patterns. You’ll surely want to check them out if you are interested in learning more about owls sleeping face down.

Other Sleeping Habits Of Owls 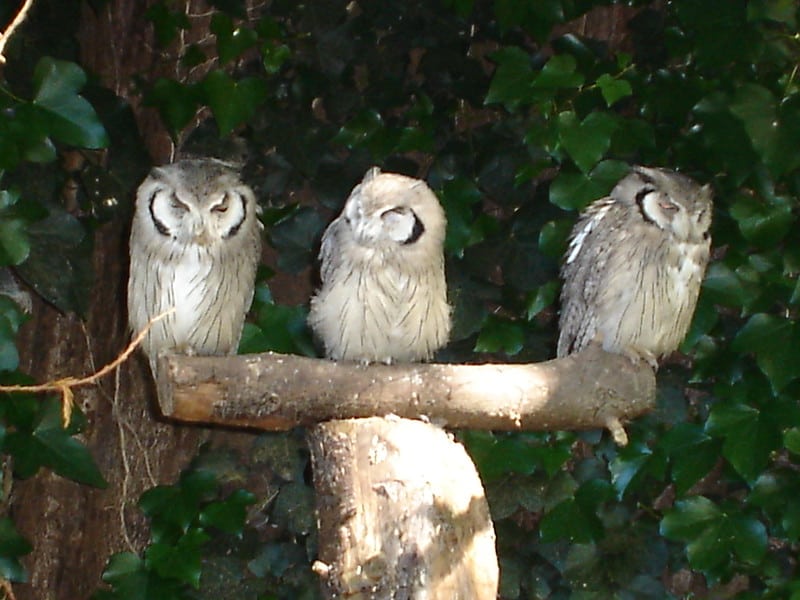 Regarding the above information, not all owls sleep face down. In fact, this is a pretty rare occurrence, and catching one in sleeping action like this would be a true random miracle.

When sleeping in this manner, most owls tend to sleep with their bodies slightly slouched and facing forward. Some members of the species will even sleep with their heads turned up at an awkward 270 degrees.

It’s a miracle they don’t cut off their blood supply to the brain, but somehow and someway it seems to work for them.

Even more interesting are the eyelids. Did you know that owls have three sets of eyelids? That’s right, they do and when they are sleeping it will be the third one covers the eye. The other two are only used for blinking and cleaning the eyes when awake.

Some recent studies even suggest that when owls are sleeping only half of their brain is inactive. The other half actually remains awake. The reason for this is currently unknown, but what is known is that the creature will rise at dusk every day and start its hunting ritual.

It’ll wake and immediately begin hunting for bugs, small rodents, and other prey that it might be able to take advantage of under the cover of the night.

So, where do owls sleep? Well, it goes without saying that the owl is a unique creature with some unique habits. Especially some unique sleeping habits. Whatever the situation is, you’ll not want to try and disturb an owl while it is resting.

They are extremely light sleepers, as only half their half is inactive, and they’ll likely attack if provoked.

That being said, it would probably be a true miracle if you did just happen upon an owl sleeping, given their propensity to stay away from areas that humans frequent during the day.