Bears wave because they have learned that humans like it when animals do human imitations. They are also likely to reward them when they perform such imitations. This is something that bears picked up on, and they use this waving technique to get food.

It doesn’t take a bear scientist or researcher to surmise that bears consume a lot of food. Just look at their girth. One certain species of bear can consume as much as 90 pounds of food a day.

Some can even consume more, and they usually do before going into hibernation for the remainder of the year. If one bear can consume 90 pounds a day just think about what it would take to feed an entire family.

The mother would also likely eat 90 pounds and the cubs would be eating upwards to half of this. That nearly 270 pounds of food, which isn’t always the easiest thing to obtain, especially during scarcer times.

This is why bears have adapted over the years. When it comes to food or appetite, they’ve grown incredibly smart and resourceful. They were always smart, but now they’ve adapted even more. 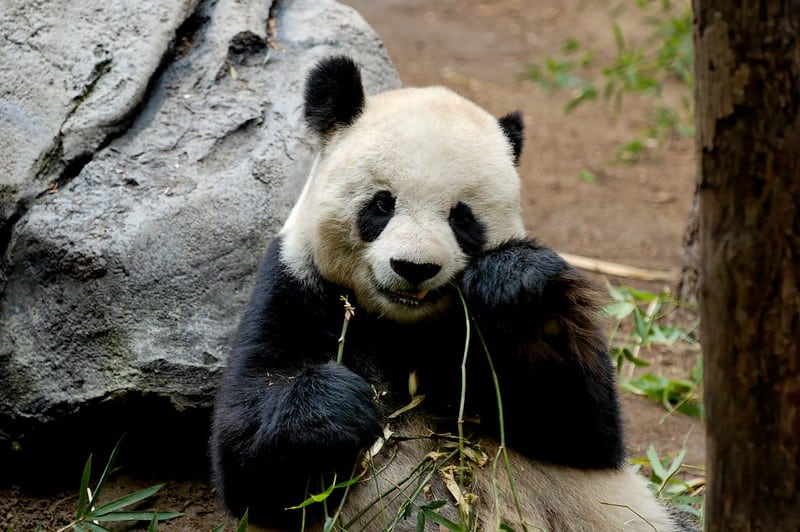 Given that the bear can teach himself to mimic human activity for rewards of food, it goes without saying that the bear species is pretty developed. Plant of the apes developed. And, this is why you cannot, by any means, mistake these actions as friendly ones.

Whenever you see a bear acting human-like or performing actions of a human to get food it likely means that he is at his wit’s end. He’s likely exhausted all his other resources and is left begging.

This bear might appear human-like and might seem tame to the point of being friendly, but this is a hungry beast of nature.

Bears do have an innate fear or people, but this does not mean that they are against using force to get what they want. They’ll use a wave to get you in and when you don’t give them any food, they’ll pounce.

Bears that have learned this behavior have also learned that wandering into crowds and camping sites are the most likely place for them to get a reaction.

This is probably just one of the many reasons that more and more black bears are being reported by campers every year. Whatever the situation is, you’ll always want to be cautious when approached by such a creature with such a developed way of thinking.

Food is not the only reason that a bear will hail at you. There are plenty of times that a bear will wave his paws in greeting when he feels threatened or someone is getting too close to his personal space.

If he has a cub or two with him, you can almost guarantee that this is the reason for waving. He’ll also do this to other animals to let them know that they are getting too close.

It’d be best just to back away and heed the warning because you do not want the odds of taking on a frightened bear, especially one with young within arm’s reach.

How To Properly React

When dealing with bears or a lot of wild animals, reaction can be key. Making the wrong move will no doubt put you in potential danger. Of course, this is something that is much easier said than done, but what’s it going to hurt to know how to properly react?

That being said, bear attacks are less common than most people would have you believe. Bears, especially the black bears, aren’t really aggressive when encountered.

This doesn’t mean it okay to encounter them and react in any manner you want. No, this could possibly prompt an attack.

If you encounter a bear near a dumpster or happy to come around the corner on one, you’ll want to give the bear a clear escape route. Never make it feel as if it is cornered.

Immediately begin to back away slowly and leave any doors open that you have to go through to reach the site. You obviously do not want to lock the bear in location. If you spot a bear in your backyard, you’ll want to find a safe distance and start making frightening noises. Banging pots and pans together is a good way to scare the bear away.

When the bear leaves, you’ll want to try to figure out what he was after and eliminate it.

It could be bird feeders, trash, pet food, ponds, or something similar. More than likely it’ll be appetite-related. Just make sure you remove all the potential attractants and speak with the neighbors to have them do the very same.

Being hailed by a bear make for quite the encounter. It might even seem cute and whimsical at first, but not that it could only mean bad things. Either the bear is hungry and trying to get food from you or it feels that you are invading its personal space.

While a lot of bears won’t attack right away, why would you want to take the risk? Slowly back away and get out of the situation. Just whatever you do, never take off in full flight because you might just provoke the animal to chase and attack you.