If you are in the farming industry or being doing some research in the area, you’ve likely encountered all kinds of weird things. Everything from people eating some of the most exotic meats to people branding their animals with hot stencils. Whatever the situation is, there is simply no denying that there are some seemingly strange practices in the farming world. One such strange practice is putting nose rings in cow’s noses

. Have you ever wondered why this is a common practice?

Cows usually get fitted with nose rings for controlling purposes. It allows the farmer or owner to more easily control the animal. In addition to having a nose ring, the cow will also sometimes be fitted with a calf wearing ring that is somewhat oddly shaped and constructed of plastic. These items are occasionally used to encourage the weaning of young calves from suckling. 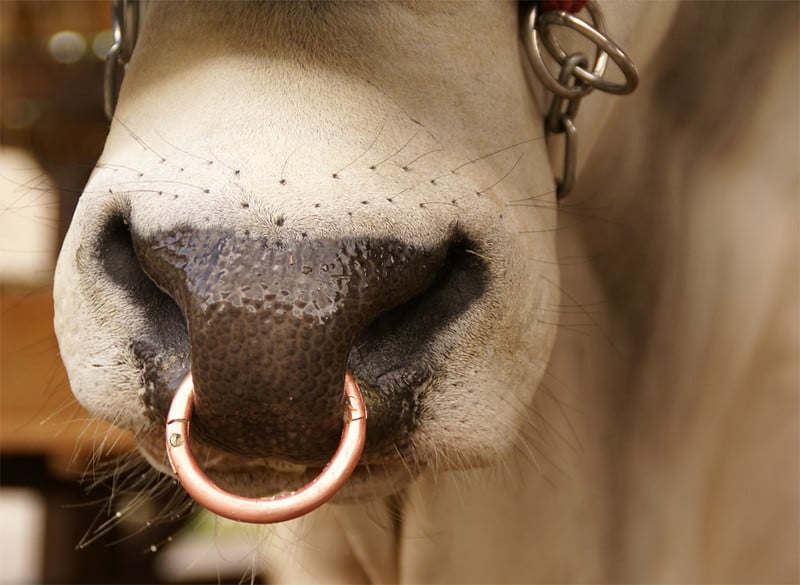 It is not uncommon for bulls to get fitted with nose rings as well. And, the reasons are pretty similar. That being said, nose rings are actually a statement that is much more common in the bull population than in the cow population, and this the because they are much more unpredictable.

Bulls are heavy, aggressive, and unpredictable animals that can make haste movements in the blink of an eye. These nose rings are used to control the animal.

The farmer or owner can grab a hold of the ring and control the bull’s head thus controlling the entire body of the animal. Give that the nose is one of the most sensitive areas of the animal, it only makes sense to utilize this tactic.

It not only allows farmers and farmhands to control the animal, but a bull ring can help veterinarians control the animal as well when making crucial exams. These rings are usually made of steel and immensely durable.

However, a bull and cow nose ring can both be a piece of copper, brass, stainless steel, or aluminum that has been turned into a ring. They are self-piercing pieces of metal specifically designed to pass through the spectrum portion of the nose where they can then be shaped into the form of a ring.

Such rings are usually three to five inches in diameter, but this can vary depending on the size of the bull. Obviously, the bigger the bull, the bigger the ring that will be needed.

It is only natural for the bull nose ring to seem cruel. This is especially true for those individuals that aren’t familiar with the practice. However, when it comes right down to it, the nose ring is really nothing more than a similar practice of getting your ears pierced.

You have to remember that bulls are huge, aggressive, strong, and unpredictable animals. Sometimes being able to control the bull with the nose ring is just one of the few things that keep the animal alive.

It is cannot be controlled then the farmer or owner really has no use for the animal.

When you think about it like this, the nose ring might seem like an even friendlier alternative. Simply put, without the nose ring, it wouldn’t be safe for people to be around some types of bulls.

All this being said, there are times when nose rings have to be removed. Well, actually there are only two to three reasons that one would remove a bull nose ring.

Believe it or not, both the cow and bull nose rings are extremely common. And, while some might view them as cruel, it is pretty obvious that they are useful tools.

In fact, there are many situations where the animal might end up on the chopping block without such a device. Nonetheless, these devices can be useful and effective when it comes to herding and controlling.

link to Wild Rabbit Sitting In One Place: [Top 9 Reasons Why]