Whether you are a fan of crows or not, it is hard not to notice the increasing number in their population as of late. This is probably especially true for individuals that live on farms or in rural areas. You’ve likely noticed double the numbers and have had to double your efforts to keep them away from your crops.

That being said, crows have always been a problem in agricultural and other rural settings, but it wasn’t until the late 1980s that they started becoming a nuisance in urban habitats. Whatever the situation is, you’re likely wondering why the increase in population and exactly what you can do to eliminate it.

Why so many crows all of a sudden? The number one reason that the American crow will inhabit your backyard is simply that he likes what he sees. Given this type of crow’s lifestyle, a well-landscaped, suburban or even rural backyard with a garden will look more than appealing. This will be especially true if its been a couple of days since the crows had a meal.

[Related Article: How To Attract Crows] 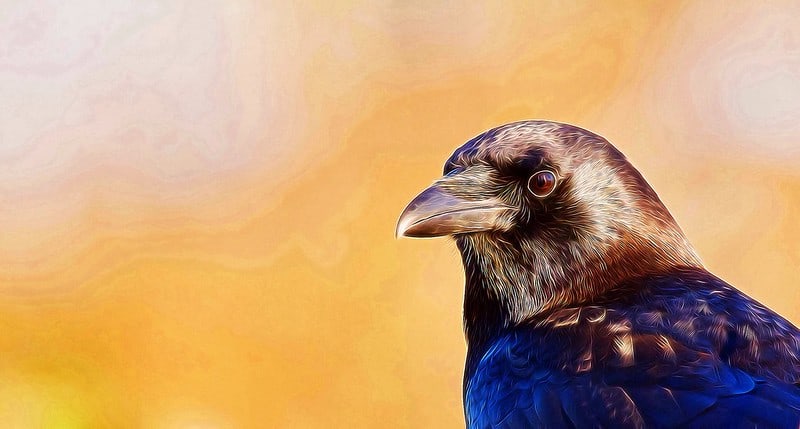 First, before you learn why crows are in your backyard and what you can do about them, you must first learn about the type of species that is inhabiting your backyard. While there are tons of different species of crows, it is likely that you are dealing with what is known as the American Crow or Corvus Brachyrhynchos.

This specific species migrates from the south of Canada and makes its way to the United States every year. The species can easily be identified amongst the multitude of other crows species thanks to its size. It is extremely large and can measure in at anywhere from 17 to 21 inches.

On top of this, it is extremely loud! Its caw is like a thunderous clap of lighting that’ll stop you right in your tracks and make you take a look. What’s even more troubling is that this species never travels alone.

Where there is one, there are going to be many, so you can expect quite the raucous site when they show up.

They are considered monogamous, social birds among their own kind and prefer feeding on insects and garden vegetables. However, they certainly are not opposed to bringing home carrion or roadkill. Heck, they’ll even get into your garbage if it is accessible and they get hungry enough.

These birds have even been know to peck through certain types of roofs in search of food, so just having them around the home can be somewhat of a threat. You don’t want a leaky roof because a hungry crow was trying to get inside your home for food.

These crows will hunt together, usually in search of frogs, snakes, and mice as well as the occasional egg or nestling of other, smaller birds.

Heck, they’ll even eat other crows when it comes right down to it. Vicious creatures with little regard for anything or anyone but themselves. Having them hang around your property is certainly not a good ideal.

It is not uncommon or rare to think that a yard like this would contain plenty of insects, minus the dangers of other predators. In a suburban setting, there won’t even be the need to wade through tall crops and grasses, so a suburban yard of this description would be even more enticing than a rural backyard with an abundance of crops.

Unfortunately, when the crow sets up in your backyard, he may be looking to start a family as well, which will only add to the population. Crows roost and raise their young from the months of March to June, and are capable of producing anywhere from four to six youngsters per mother.

The youngsters might migrate away with their parents when the time comes, but they might also stick around and enjoy what your yard has to offer.

[Related Article: How To Befriend A Crow]

Inventory Of Your Habitat

When it comes to roosting, this is something that crows like to do it high up off the ground. They’ll like to do it at least 60 feet up, so tall trees in a backyard are going to be a welcome sight for the approaching crow.

Crows will also consider water availability when evaluating your land. If there is a nearby river or a koi pond, your yard is going to be more than a welcome prospect.

They especially like the koi ponds because they are smaller. If you have a garden, you are simply just asking for trouble. Of course, this doesn’t mean that you can’t enjoy these outdoor amenities.

Everyone wants a nice landscaped, inviting yard for cooking out and entertaining. However, you’ll have to learn to how to deal with a potential crow problem if you want these things. 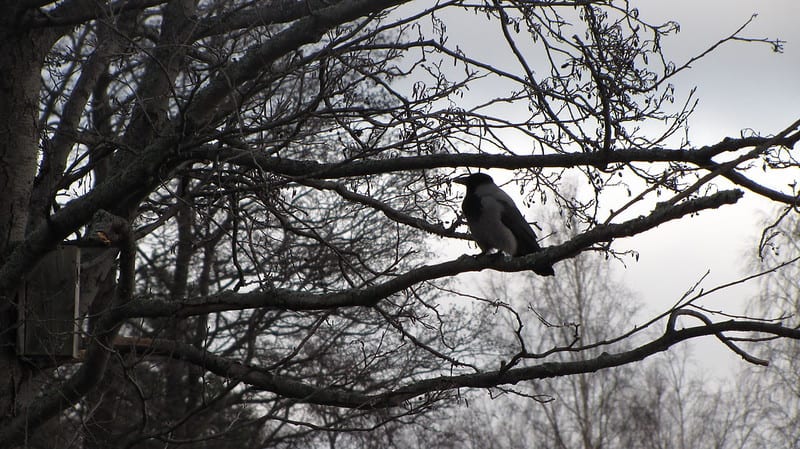 You learned that crows liked to roost at least 60 feet in the air. If you top some of those taller trees or eliminate them completely, you might find that your crow population will dwindle.

The only problem with this, especially in suburban areas, is that the trees might belong to a neighbor, they might belong to the city, or cutting them might be too dangerous for you.

Always make sure that you are checking with the right authorities before cutting down trees, as you might end up getting sued or making an enemy for life. Professional tree trimming services are not amongst the cheapest either, so there is always that to consider as well.

A sprinkler system is another good alternative. You can have it run during the day when the crows are active to try and deter them away. If you are located in a suburban area it is likely that you already have one of these systems in place. You’ll just want to tap into it and run a line over to the trees, garden, or the infected area.

Once again, the downside to this is money. Even if you do the installation and work yourself, you’ll still have an increase in your monthly water bill.

As you can clearly see, the American Crow is not your typical crow. And, it poses all kinds of threats to you, your garden, your family, and your property. Luckily, there are several ways that you can realistically combat this unwanted creature.

This is something that you’ll want to jump on at the fight sight of a crows because you don’t want them hanging around any longer than necessary.